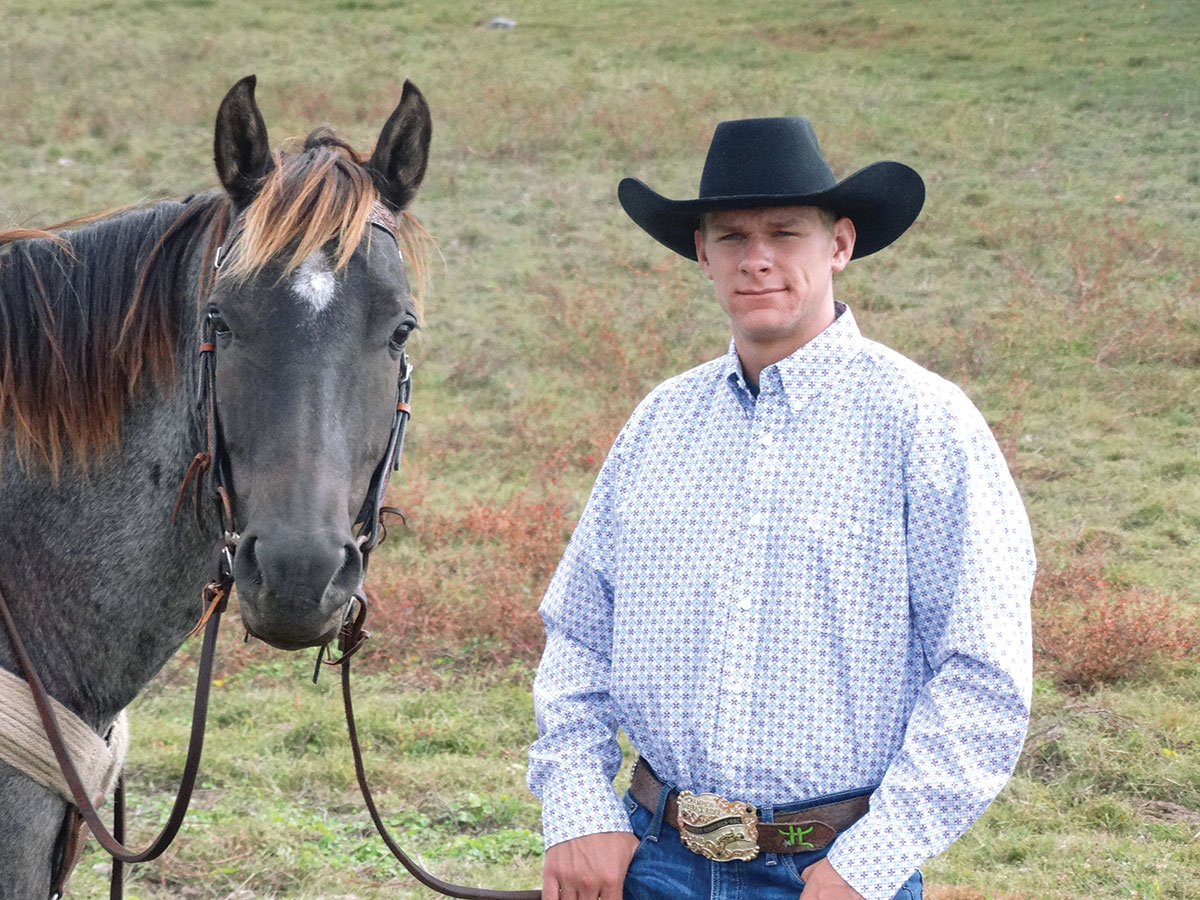 Agriculture has more than its fair share of well-grounded and driven youth, but few purposely start on their life’s goals as early as Hayden Leavell, a junior at Ozark High School.

When he was 3, his father Brent gave him a bottle calf, Cokomo, to raise and sell two years later.

After the sale, Hayden saved and invested the money in order to buy a registered Limousin calf when his family moved to Arkansas and bought a chicken and cattle farm. Next Brent then gave him a few commercial heifers, which he kept for cows, selling steers when they were 9 months old. Hayden now has 13 registered LimFlex females from Magness Land and Cattle in Colorado.

“I always knew I wanted a cattle operation and, like my father, continue expanding my herd by keeping the females and selling steers,” Hayden said.

Hayden comes from a supportive family who not only allows him the freedom to change directions when he wants, but goes the extra mile to actively participate. And change he did.

Hayden joined 4-H when he was 6 years old and showed LimFlex heifers, in addition to belonging to the Arkansas Junior Cattlemen’s Association. Then his interest changed and he quit showing in favor of participating in competitive bareback riding and team roping, switching membership from the Junior Cattlemen’s Association to the Arkansas High School Rodeo Association. In addition, he became a member of FFA with advisor Heidi Gregory and Ben Culver. He has been the sentinel for the last two years and is currently part of the leadership in a fundraiser, with the money going toward building cattle guards and other equipment. Then a year ago, he was approached by Coach Burns and asked if he would be interested in playing football.

“I have friends who play football, and I liked the idea of playing as a linebacker and kicker rather than sitting in the bleachers as part of a passive audience,” Hayden explained. “My parents first drove me to cattle shows, and, without skipping a beat, switched to taking me all over the country for rodeos even though my dad Brent and I work our five broiler houses and 200-acre cattle farm by ourselves, with my mom Teresa working as a sales representative for grocery stores.”

The family is not only extremely busy but obviously hard-working as well. When the family first moved to Arkansas, other family members gathered to help build fences and get Solid Rock Land and Cattle ready for production. Hayden’s family not only modeled the hard-working ethic but instilled that quality in him.

In his high school ag classes, Hayden leans toward the mechanical side rather than the animal science side because he believes he’s learned what he needs to know about raising cattle by working with his father. He also knows a successful farmer has to be resourceful and able to repair or build what he needs. Consequently, he is focusing on more knowledge for his other goals. Hayden is currently involved in three agricultural classes: advanced agricultural mechanics, agricultural precision computer-controlled numerical metal fabrication, and an agricultural welding college credit class.

Though young, his life plan is well-formed. He wants to someday have his own real estate/construction company, as well as to take over the farm in the far future. His older brother David is a building materials manager in Tulsa while his sister Myranda is an inventory control warehouse manager for a utility contractor in San Antonio, Texas. Neither are interested in returning to the farm. The first step toward his goals is college. He’s hoping to be awarded a rodeo scholarship or wants to attend Arkansas Tech to pursue a degree in agribusiness and real estate.

Hayden has detailed knowledge of running Solid Rock Land and Cattle. He likes the LimFlex breed because they are all black, bring a higher sale price and possess hybrid vigor with lower birth weights and higher weaning weights. The cattle operation is two-pronged. One with registered LimFlex cattle with heifers retained and breeding bulls sold by private treaty. The other is a feeder cattle operation so the numbers of cattle on the farm vary as the feeder cattle arrive and leave with the total number of cattle ranging from 150 to 170 head.

Because the ranch is more oriented toward production, AI was not a good fit so they breed naturally, changing bulls every two years. One of the biggest concerns on the ranch is fly control because of the chickens. They use a vet gun monthly with further support coming from backrubs and mineral with fly control.

They raise their own silage on a 35-acre hay meadow and typically produce 300 silage bales with two cuttings along with several hundred dry bales a year. The land is fertilized with chicken litter and/or commercial fertilizer according to monitored pH levels.

“What I am striving to do is carry on what my family has taught me,” Hayden said.

A Beef Herd Built from Roping