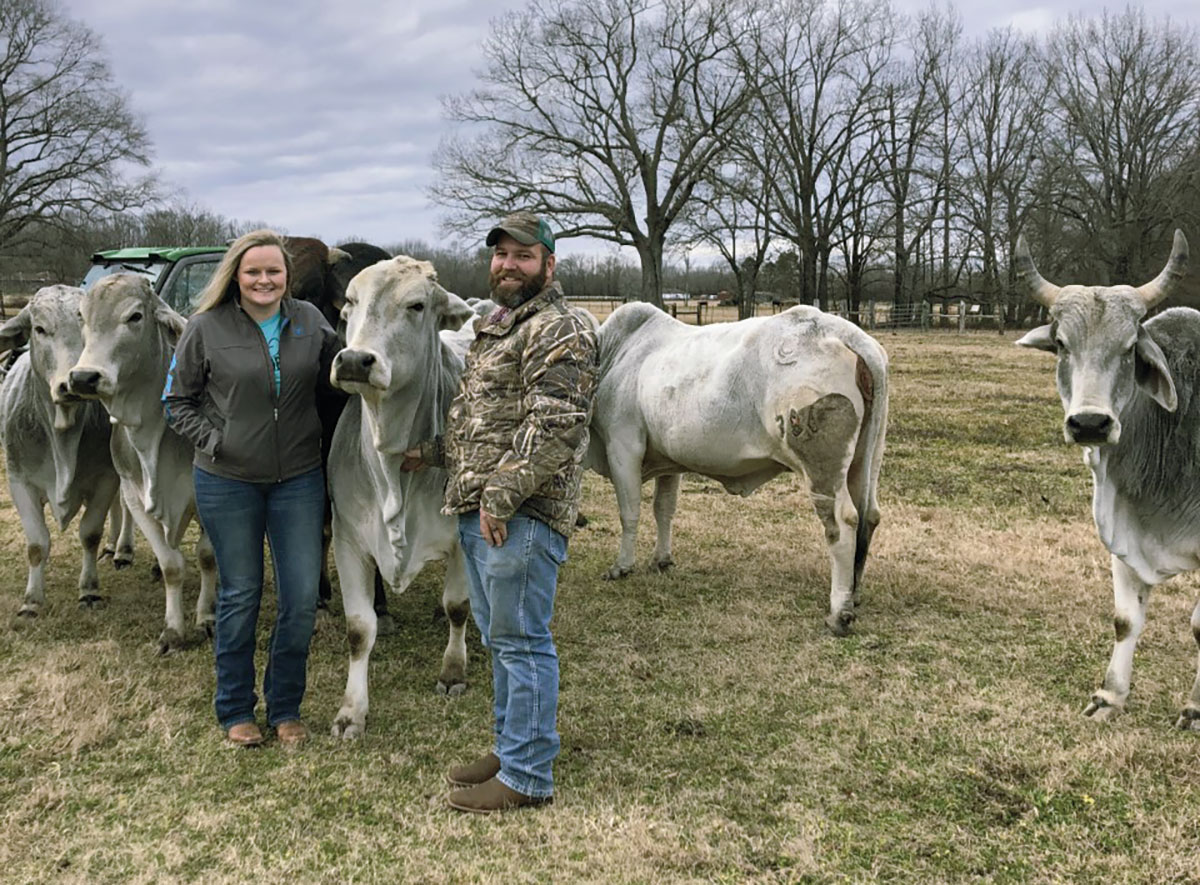 For Aaron Ross, agriculture is both his career and his hobby.

Aaron has been a program associate for weed science since 2014. During growing seasons, he compares herbicides and weed control products in a manner similar to Consumer Reports. Aaron constructs totally unbiased rankings of different products so farmers can make an informed, science-based decision on what to use.

Once the workday is over, Aaron goes to the farm where he is in partnership with his grandfather Clarence. They manage 400 acres of owned and leased land in Ward, Ark. The farm contains two herds, one commercial and the other Brahman. The Brahman herd is Aaron’s hobby.

How Brahmans first came to the Ross farm is a favorite family story. Clarence and his wife Pat met in Beebe when he was showing dairy cattle. After the couple married, Pat cheekily asked Clarence what was the purpose of having dairy cattle if you’re not going to milk them. Clarence immediately quipped he did not want a 24/7 job and asked her what she thought he should do. Pat quickly retorted that perhaps he should get Brahmans, and so he did.

The current Brahman herd is made up of 18 registered females and one registered bull. Aaron grew up around the breed and started showing when he was three. Through the years, he sometimes competed at bigger shows, that is with more Brahmans, to see how their Brahmans measured up against those from bigger breeders. Once, while attending a show in Tulsa, someone asked then 10-year-old Aaron why he came all the way to Tulsa to show. Without hesitation, Aaron replied, “We come to Tulsa to play with the big boys.”

“The folds of skin may look funny, but Brahmans do sweat which cools them,” Aaron explained. “The sweat also serves as a natural insect repellent, more effective for preventing illnesses such as the West Nile virus from mosquitoes and eliminating flies.”

The purpose of Aaron’s Brahman herd is to provide show animals since he still loves showing. The last two years of high school, he showed at fairs and jackpots every weekend during show season and traveled 5,000 miles within Arkansas. Consequently, showing became less fun and Aaron wanted to regain that sense of fun.

“As a guard against letting showing get out of hand again, I now keep the herd small with no more than eight show animals at a time made up of bulls and heifers under 3 years old.

“I try to keep bulls until maturity, which in a Brahman, is 2 years of age. One result is the bull has been places, seen things and is a big puppy dog for prospective buyers. I schedule my calving in winter so I can get three years of showing instead of two out of the show string, but tend to have a few calves in the spring and summer.”

Aaron likes to keep the heifers, but Clarence taught him everything is for sale. This means Aaron will sell a heifer, but the price has to be fair. Calves are weaned at 4 to 6 months, depending upon size or if a calf is pulling a cow’s health down. Calves are fed a 13- to 14- percent custom mix with a formula Aaron developed and the local feed store balanced. The calves are fed as much as they will eat. Currently he has six calves in the barn consuming anywhere from 16 to 30 pounds of feed a day, depending on age and size.

The other side of the Ross farm is a commercial herd with 40 heavily Angus-influenced cows, 70 percent of which are black. Because black sells better, the goal is to produce black calves or black baldies. Females are bred by a mixed group of bulls: two registered Angus, one black Brangus, one Brahman and an unusual half Brahman and half Holstein bull with hopes of increasing milk production. Bulls are matched to heifers by color, with black being dominant. One unexpected result is the large half Brahman and half Holstein bull produces birth weights more like the Brahman than the Holstein. Calves from the commercial herd are usually sold at the biannual prevaccination sales at Pruitt’s Mid-State Livestock in Damascus, Ark.

“The standards for the sales are similar for those in the Beef Quality Assurance Program, but are based on producers’ honesty rather than documentation,” Aaron explained. “The requirements include appropriate vaccinations, as well as backgrounding for 60 days after weaning. For me, it’s the easiest path to travel.”

The commercial calves are weaned at 5 to 7 months in late October and separated from their dams by cattle panels so weaning is less stressful. Calves are put on a ground corn and soybean meal ration and settle after three days, but in the confined area for two to three weeks. The calves receive 12 pounds of ration per day until sold.

“Part of me will always want to increase my Brahman herd,” Aaron admitted. “I simply don’t have the time, and resisting that temptation will allow me to enjoy the breed and showing for many years to come.”