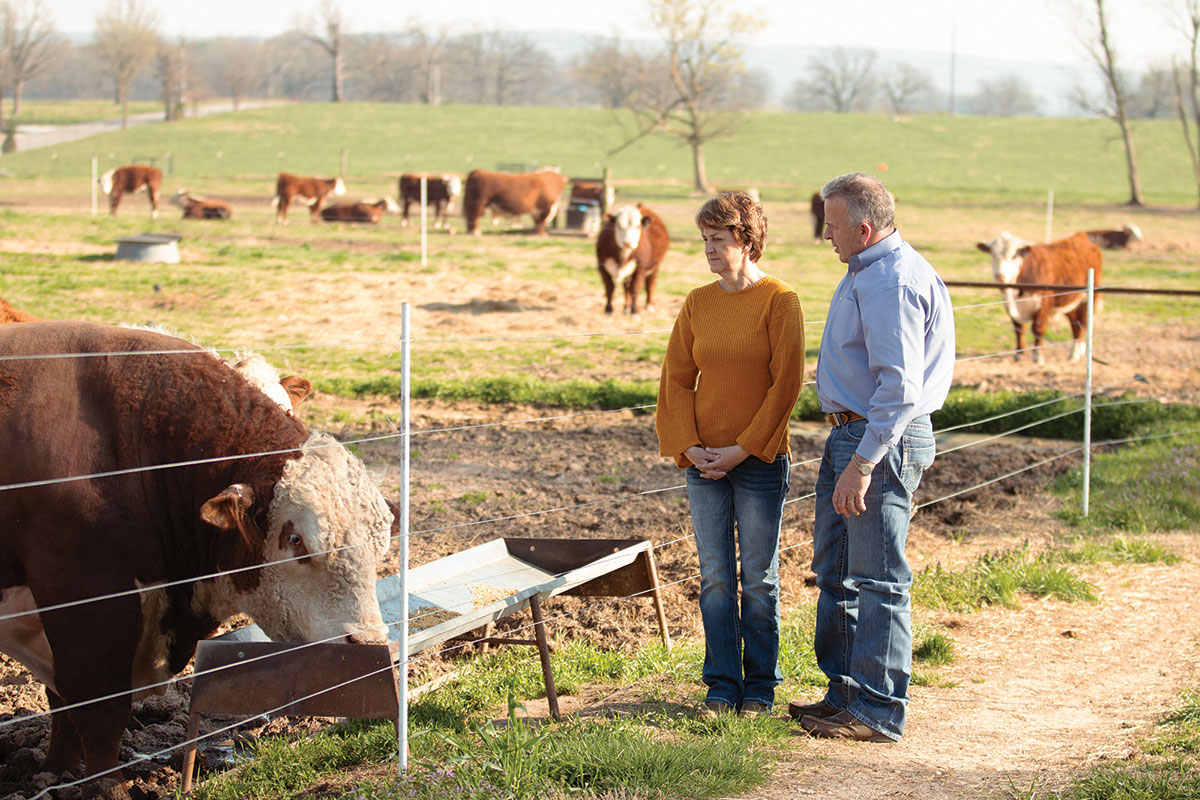 While both Craig and Debbie Bacon came from production agriculture families in Missouri, their backgrounds were different and had significant impact on how their cattle and sheep operations evolved.

The couple met at the University of Missouri. Craig was raised at a dairy farm and showed Herefords. Debbie was raised on a registered Angus, swine and row crop farm. Professors predicted the couple would raise black baldies. That didn’t happen. Craig was familiar with Herefords and deeply influenced by his ag teacher Gregg Alsup, as well as good friends Dr. Burl and Reba Pfander. Consequently, Bacon Cattle and Sheep raise registered Herefords and commercial club lambs, along with some Dorset ewes. However, most ewes are heavily-influenced Hampshire crosses with all ewes bred by Hampshire rams. The sheep are mostly Debbie’s area.

“Craig won about the cattle because his opinion was stronger than the professors’ and even mine,” Debbie bantered good-naturedly. “However, we have 30 acres devoted to sheep, something our daughter Amanda particularly enjoys.”

Craig and Debbie have three children, two of which work at Simmons where Craig is senior vice president of Technical Service. Son Justin works as a senior food technologist while their youngest daughter Amanda manages the regulatory team at Simmons. Their oldest daughter Cassie lives in Canada along with her husband and have their own livestock marketing business, Rural Route Creations. Cassie has two children while Amanda and her husband Kirk Boecker have recently gifted Craig and Debbie a new grandson named Oliver. Son-in-law Kirk is an integral part of Bacon Cattle and Sheep, working full time on the operation with a focus on managing the cow herd, while also assisting with the sheep portion of the operation.

Debbie remembers the pride she felt in the responsibility of steering a tractor while her 12-year-old brother Terry chucked square bales of hay from the carryall. When done, Terry climbed back onto the tractor and took over. Because Debbie’s father Delmar worked off the farm, Terry was in charge at that young age and quickly made Debbie his “right-hand man.”

“That gave me confidence although I didn’t find out until years later that my mom often complained to my brother that I was always working on the farm and not helping her in the house,” Debbie confided. “I also remember the loving and wonderful time I spent with my dad walking and checking cows. The combination lit my fire and made me decide to stay in agriculture.”

Predictably, the couple started out in Missouri but soon moved to Tennessee for graduate school. After a short stint in Madison, Wis., they moved to Arkansas and established their farming enterprise.

The Bacons relocated to Siloam Springs, Ark., in order to purchase more land and expand their herds. While the lay of the land was appealing, the fact that it was available at the right time, in one parcel and located on Highway 16 made their current acreage a wise choice.

All Hereford breeding stock is registered,, with the Bacon cattle operation producing numerous state and national champions. The Bacons run 125 mature females and retain some heifers, but sell most at weaning, as yearlings, or as bred heifers. Females are sold at Hereford Association-sponsored state and national sales in Illinois, Missouri, Arkansas and Oklahoma. Outside females are occasionally purchased to prevent “breeding into a corner.”

Bull calves are occasionally sold as young as 12 months, though semen testing is not yet possible but typically at 15 to 19 months.

New female records are analyzed first to determine if they come from a line of good mothers with quality udders and high fertility rates. Bulls are initially analyzed by the quality of their dams so they will pass on the all-important maternal traits, along with good fertility rates and stoutness in terms of muscle and bone, with sound feet and legs. Once production criteria are met, the Bacons begin to sort perspective purchases by phenotype so calves will be competitive in the show ring.

Thick, straight hair is a current show preference, as are straight lines and what Debbie calls an attractive front.

Females are synchronized for breeding. While commercial Angus females receive embryo transplants, mostly embryos from the Bacon herd, the remainder are bred by AI with only a few bred from outside semen. Then, if the AI doesn’t take with one try, the Bacon bulls take over. One of the keys to their operation is that their bulls provide high-quality semen sold nationwide so the term “cleanup bull” seems inadequate.

While the goal is to have all the cattle produced at Bacon Cattle and Sheep of the quality to utilize in their herd or someone else’s, there are always those calves that do not meet the criteria.

The Bacons retain ownership of those calves and send them to a feedlot in Kansas, which then provides important statistical feedback used in future breeding pair selections.

Space is the biggest issue in club lamb production hopefully solved by a larger sheep barn in the future. The Bacons maintain 85 ewes bred by three rams. The top 10 percent of the ewes serve as donors and are flushed before being bred. Unlike most sheep operations, the Bacons AI all females, mostly with their own semen but also with some purchased from other breeders. If a ewe does not produce a good lamb, she is then brought into service as a recipient ewe and is bred using embryos produced from their flock. Lambs nurse naturally and begin eating creep feed when about two weeks old. Then the lambs are weaned at 8 weeks when the ewes are moved to pasture, while the lambs stay in the barn until May when temperature fluctuations even out.

“What I especially enjoy is watching the local kids buy our lambs beginning when the lambs are 8 weeks old,” Debbie said. “It’s such a joy seeing both the kids and the lambs grow and learn although seeing them win is naturally a huge deal.”

Part of keeping the operation profitable is raising hay, with 95 acres set aside for hay production. Hay field and pasture composition are fescue and Bermudagrass, with naturally occurring white clover. The operation’s production meets all herd needs except for lactating ewes which need and receive purchased alfalfa. Soil is tested annually, with specific fertilization balance determined by the results. A weed control program is utilized in the farm operation.

“Our children loved the farm and showing, and we are looking forward to introducing little Oliver to the farm and livestock and perhaps, one day, showing some of our animals as our children did. This is going to be fun,” Debbie exclaimed.