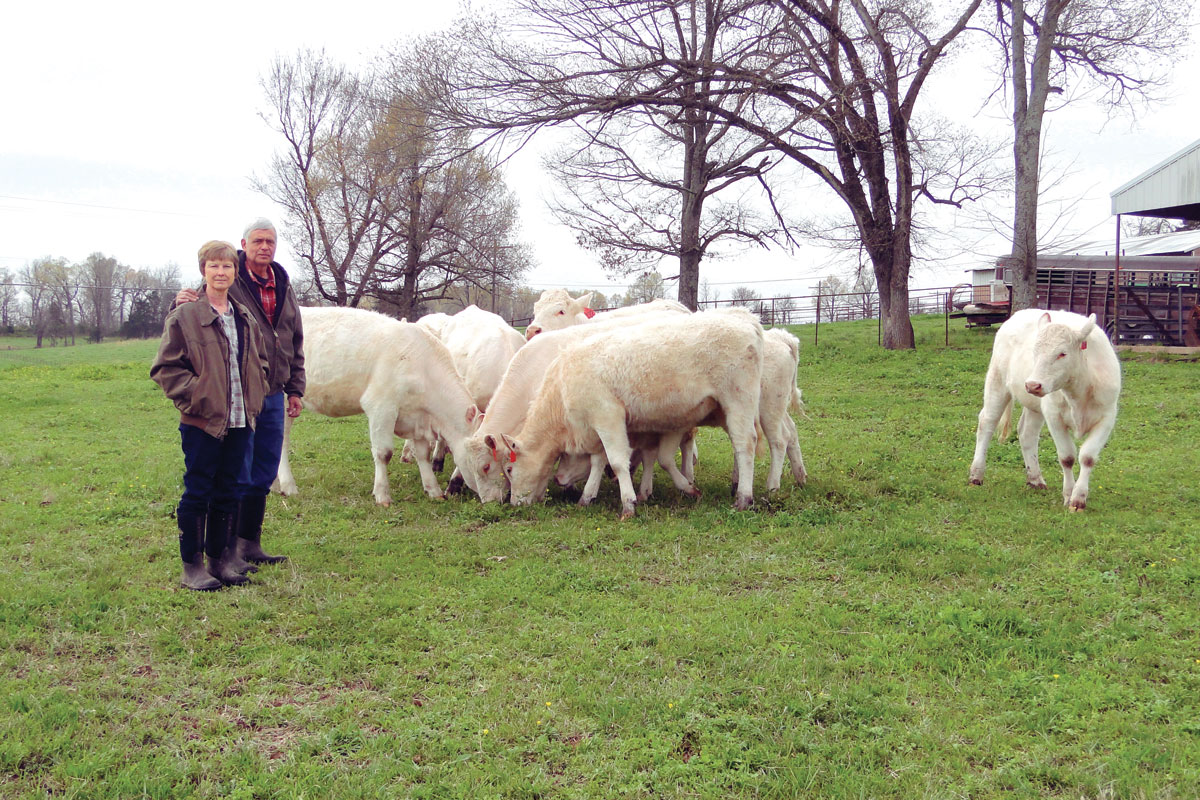 Young people usually begin new farms in one of two ways: they either inherit land or purchase it.
Derwin and Rhoda Martin of Everton, Ark., are an example of those who start from scratch. Though Derwin didn’t inherit land, he did inherit some old family stories based on oral tradition rather than evidence. One was that an uncle way back when held the reins of Belle Starr’s horse while she robbed a bank in Harrison, Ark., with the other being that his grandparents, Frank and Stella Martin whom he called Ma and Pa, used to go to town in an old buggy where Stella might have to wait all day while Frank saved 5 cents on a deal.
In 1980, Derwin and Rhoda purchased 57 acres, later adding another 100 acres 3 miles away in Marion County. The couple began with a Holstein dairy which they ran for 12 years. Derwin milked in the mornings and only missed 10 mornings in all those years, but fortunately could get afternoon help. The Martins bred the dairy cows to a Charolais bull, keeping the calves to sell for additional income. Replacement cows were purchased because of the limited land space. After Derwin and Rhoda’s parents put Rhoda through school, Rhoda taught first as an English teacher and later as a librarian.
Derwin quipped, “Basically, she supported my habit.”
In 1992, the couple decided to sell their cows thereby getting out of debt with some extra to purchase a few cows and a Charolais bull. They also began converting their dairy barn into a home by using Derwin’s carpentry skills and turning the upper feed storage area into a bedroom for their daughter Melanie who showed horses in Halter and Western Pleasure classes when she was young but now is on her own working at FedEx.
Derwin always liked the Charolais and Brahman breeds and bought cows, one here and one there as he developed a commercial herd. He felt the combination of breeds produced well muscled and hardy, heat-resistant animals. One of his cows named Cookie placed fifth in the state in her class and third the next year. He had bred her by AI so that his original $1,400 purchase in 1980 turned into $5,300 for her and her three calves. His goal was and always has been to raise good cattle.
Not long after Rhoda retired five years ago, the couple decided to switch to a registered polled Charolais herd in order to maximize income on their acreage. Part of Derwin’s cattle philosophy is confining or catching the head of his cattle as little as possible while being around them all of the time. Part of the results of this philosophy is that he does not worm unless an individual needs it. According to Derwin, the biggest health challenge for him is the two weeks before or after birthing because that’s when cows have issues.
Derwin said, “If you want cattle to get stupid and temperamental, trap them often. It’s less stress for me and less stress for them.”
Then Rhoda laughed, “I have an important job too. I am the official gate opener.”
Derwin readily admits that the Charolais breed at one time had birthing issues but maintains that the right bloodlines have almost eliminated the problem while the lighter weight calves bred by the right kind of bull grow into the muscled animal the breed is best known for. He also believes it’s important to not breed a heifer too soon.
“One of my favorite things is to find a new baby calf on the ground when I go out to see my cows,” Derwin said.
Because of the limited acreage, Derwin has adapted his processes to fit that acreage. He lets the land in terms of grass and hay determine the size of his herd. His land is mixed grasses, with 40 acres set aside for haying.
Derwin rotates the cattle on the rest of the acreage. To prevent waste, he drags with a resourcefully made pipe and tire device as soon the cattle are moved. He then lets the grass grow to harvest later. Derwin also fertilizes with locally purchased turkey or chicken litter on a rotational basis section by section and often over seeds with ryegrass for better winter forage.
Another land management practice is rolling his hay out on bare spots to reseed it.
“A guy once told me that every bale of hay has $20 worth of seed; something that has worked well for me,” Derwin said.
This last year Derwin purchased alfalfa hay for more protein so he could decrease the amount of grain he needed to feed. According to Derwin, the grain is 13 to 14 percent protein while good alfalfa is 18 to 20 percent. Derwin said, “Protein is protein, and cows are naturally grass eaters,” he said.
Derwin also has a flock of sheep. He has been the pastor at Yardelle Chapel for 12 years to what he calls a “wonderful group of people.”
“God spoke to me one night and told me he wanted me to preach. I never asked to preach anywhere. Requests came to me. If not for Jesus, I would have nothing and certainly wouldn’t be here,” Derwin said.