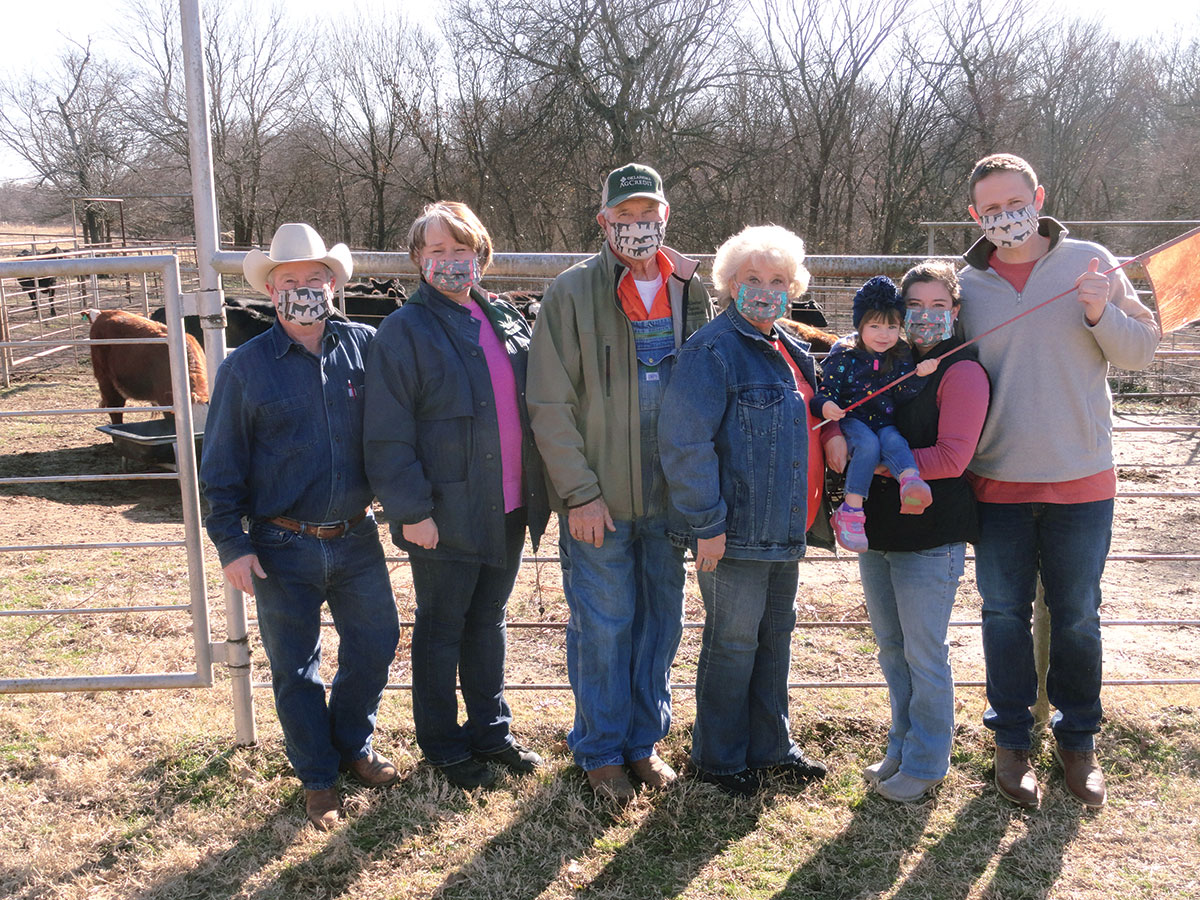 Charlie Ross bought the Webbers Falls acreage in the 1940s where he raised cattle and five children. When he passed, son Charley was the only one interested in staying on the farm and bought out three of his four siblings.

Charley and his wife Ann’s daughter, Judy, and her husband, Calvin Moore, now operate the farm.

Whippoorwill Hill Farms got its name from Judy’s father because Whippoorwill was his CB call name.

Calvin and Judy, along with Judy’s daughter and son-in-law Donna and Bob Woods, run their operation on 280 acres. The acreage includes leasing land from Judy’s cousins who retained their mother’s share of the property. While Calvin and Judy reside on the farm, it is a family operation with 18 members of the extended family chipping in at different times when the cattle are being worked.

Calvin, Judy, Donna and son John Ross Maloy have a cumulative of 120 years in education, though John is the only one still working in education. Daughter, Lt. Col. Kim Howerton also was involved in education initiating a program for at-risk children through the Air National Guard. Kim plans to retire to the farm while Donna and Bob will be building a home on the property this year. Regardless, everyone finds time for cattle.

Most of the farm work is divided among Calvin, who is the cattle buyer and day-to-day farm manager, son-in-law and retired Oklahoma State University agronomist Bob Woods, who cares for the land, and Judy is the statistician.

“I use a computer system called CattleMax that allows me to work in the field as well as at home and has the capacity to add health procedures, pasture changes, calving dates and documentation with pictures,” Judy explained. “I gather the data about everything and put the information in front of Calvin and Bob who then make decisions.”

The family runs a herd of 50 Angus-influenced females bred by a registered Hereford bull for spring and fall calving. They select the bulls from the Kent Barnes’ Payne County herd. Kent, a retired livestock expert at OSU, recommended their current bull as a good prospect because he had show quality confirmation with good EPDs and development. Kent’s wife Diana demonstrated his temperament by feeding him from a bucket of feed as he followed her. The previous bull, also a Barnes’ bull, produced three sets of twins last year.

“Kent ‘steers’ us right,” Calvin chuckled. “So we keep going back.”

The most important thing Calvin learned about cattle, he learned when he was 19. He noticed his father’s overcrowded land, which was the result of anything born on his dad’s farm dying on the farm. The result of Calvin’s observation is that Calvin culls cows quickly and accurately because of excellent record keeping. Culling criteria includes poor milkability, udder issues, not raising a healthy calf or skipping two breeding cycles. In addition, the Barnes’ bulls are changed every four years because they retain heifers. Bulls seem to have very few health problems. Their last bull reached 2,400 pounds and eventually traveled too slowly to be as productive as they wanted.

Calves are fence-line weaned at 6 to 7 months, typically weighing 500 pounds and sold at 700 pounds when they are 9 months old. The farm participates in Oklahoma’s Quality Beef Network. Those protocols are enhanced through Bob contacting a veterinarian each year for recommendations for the best vaccinations currently available. Belonging to the organization requires calves to have two rounds of vaccinations, and weaned at least 45 days, preferably 60, before being sold. The calves must be castrated, dehorned and fully healed by sale time. Whippoorwill’s calves are sold at three different sale barns, including McAlester Union Stockyard, where Calvin works one day a week as a USDA livestock reporter.

The cattle are grazed on three 80-acre pastures and rotated according to grass height or when the cattle let them know they’re ready to move by standing and waiting for them to arrive. Weeds are sprayed once per year, with Bob diluting the herbicide so clovers are not harmed. The land is fertilized mostly with commercial fertilizer and occasionally with chicken litter according to Bob’s annual soil testing results. Bob recommends a controlled burn for certain pastures in order to improve forage. The fire crew uses drip torches. At such times, the large family gathers around the edges with a water spray rig and flappers in case the fire becomes unmanageable or a spark goes too far. In addition, the fire department is informed, sometimes observing and sometimes being on call.

The land-usage system uses four pastures. Grazing is postponed on two pastures in June in order to harvest hay in early July. Then two pastures are allowed to grow again in August and September for stockpiled fall and winter grazing. Cows are fed 37-percent protein cubes while grazing dry standing forage in the fall, which continues until hay feeding begins, usually in early to mid-January. Cubes are typically fed three days a week.

“Of course, the cattle always have access to good-quality mineral,” Calvin added

The Moores have little trouble selling their colts, some of which have done well in competition while others are purchased to become ranch horses.