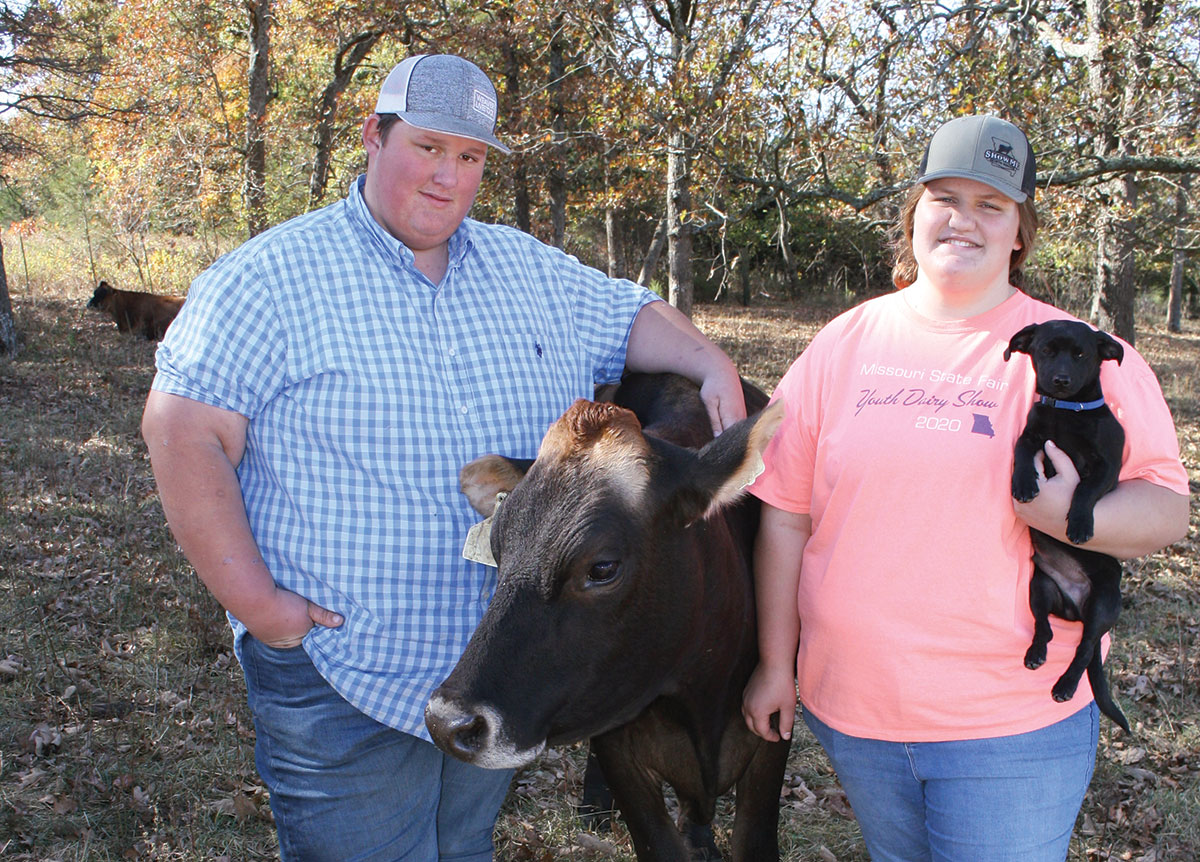 Farm life is the only life Logan and Molly Archer have ever known, and it’s a life they thrive in.

Their parents, Robert and Jamey Archer, grew up on family farms and they continue that tradition with their children.

The family moved to the Ozarks in March 2013 after living in both Colorado and Minnesota, where they also farmed. Once they settled on their farm near Falcon, Mo., the family began a diversified livestock operation, including dairy and beef cattle, as well as sheep.

Molly, 14, and Logan, 15, are active on the farm, with both liking different aspects.

“She’s our dairy princess,” Logan said of his younger sister.

“I just like milking cows,” Molly added. “I like knowing that I’m contributing to the ag industry by producing milk. Dairy farmers are underappreciated.”

The Archer family currently has about 30 cows in the barn, with 20 dry cows and younger females. The herd is primarily Brown Swiss, mixed with some Holsteins, Jerseys and crossbreds

“I like the longevity of the Brown Swiss,” Molly added. “They are very stout and do well in hilly areas.”

The beef herd consists of 65 pairs of mostly commercial LimFlex.

“I like the beef side,” Logan said. “I like to see a cow have a calf and raise it up to be either a replacement heifer or see that calf go to feed someone.”

The dairy cattle also contribute to the beef operation as Angus or LimFlex bulls are used as clean up bulls. Any offspring resulting from the mating are sold as steers. Some heifers may be retained for future cow/calf production.

The sheep operation is about 120 Katahdin ewes.

“We don’t have to do much with them,” he said. “We run them with our dairy cows, which improves our pastures tremendously because the sheep will eat what the cattle won’t. In the winter months, we do get them up and feed some hay, but there are no input costs. They aren’t as meaty as other breeds and they don’t feed out as well as Dorper, but they raise better lambs.”

Molly added the majority of the herd are commercial ewes, with a few being registered, as well as using registered rams in their breeding program.

The family is working on getting their flock to 360 ewes, then introducing Dorper rams to create terminal crosses for the meat markets.

For both the cattle herds and the sheep, Logan and Molly are working to produce quality females. The family began retaining heifers from their beef herd two years ago. They waited to retain females to get a cleaner LimFlex line, breeding out earlier Simmental genetics.

Members of the Barn Bums 4-H Club, Molly and Logan travel to several area fairs and the Missouri State Fair with their dairy cattle.

The siblings quickly answered “yes” in unison when asked if they enjoyed showing their animals.

“I like seeing the different quality of animals at the fairs and seeing how I can improve my animals,” Logan said.

The Archers were among the first exhibitors of dairy steers at the Missouri State Fair.

“In 2019, I took a Brown Swiss steer because I saw an ad saying there was going to be a steer show, so I did it,” Molly said. “While I was there, a lady from around St. Joseph, who has oxen and raises heritage breeds, saw him and asked if he was for sale. I said, ‘I guess he is.’ That following September, she came and got him, and he’s an ox at her farm.”

Logan added that the calf Molly showed was a home-raised steer, and the addition of a dairy steer class allows more young people to participate in livestock shows.

“None of the county fairs around here have a sale for dairy steers like they do beef breeds,” he said. “When you go north, dairy steer shows are bigger than beef steer shows. For a kid who wants to show, they can afford a dairy steer. They can buy a bottle calf, raise it, show it and sell it, and not have to pay $1,500 for a steer.”

Showing cattle also has a few other advantages, including bringing smiles and a little joy to others. In September, Molly and Logan took a couple of show heifers to participate in a pet parade at a local long-term care facility.

“Some people just have bigger pets than others,” Molly said with a laugh. “Residents have been stuck in there and can’t see their families, so we just walked them around the outside. It made them happy.”

They planned to take animals back to a local facility for Halloween, all dressed up for the holiday.

In addition to their farming ventures, the siblings are also very active in livestock and dairy judging in 4-H. Both have competed at local and state levels.

“Livestock judging is one of my favorite things to do,” Logan said. “The goal of my senior team is to win state so we can go to nationals in Denver at the National Western.”

About a year ago, Molly completed AI school, the youngest in the class at age 13, and now performs all AI duties on the dairy and beef herds.

She said her conception rates are “pretty good.” She will have a chance to put her skills to work on the cow/calf side of their operation when she AIs 22 replacement heifers this fall.

Being raised on a farm, Logan and Molly said they see production agriculture as part of who they are for many years to come, and they plan to stick close to their roots.

“I couldn’t see myself doing anything else,” Logan said. “You learn how to work and learn life skills early; kids in town don’t always have that option. You learn responsibility at a young age and it helps you to grow up.”

The family works together at Archer Farms, but Molly and Logan make their own decisions about the animals they own and the direction they want to take those animals.

“Dad wishes I hadn’t bought that heifer,” Logan said, pointing to a Milking Shorthorn heifer. “But it was my decision. Sometimes we make mistakes and when we do, we have to fix them.”

Once they finish high school, Logan, who is handy when it comes to working on equipment and vehicles, may attend a diesel-technician program or the two-year John Deere technician-training program at Fort Scott Community College in Kansas. Molly hopes to attend College of the Ozarks, majoring in animal science, and expand her AI services to other breeders, possibly getting embryo work.

The siblings say their future careers will help them provide for their real passion – raising livestock.

Molly would like to focus more on the dairy operation. She recently purchased two registered Brown Swiss females at a sale in Oklahoma as part of that plan.

“I’m into genetics,” she said. “I like looking at a bull’s records, breed him to a cow and ultimately have a better cow with better genetics. I want fancier show cattle, but I also want an animal that will produce because the females will go back into the barn one day. Next year, I hope to get some embryos and use my cows and recips,” Molly said, adding that her recently-purchased females are possible flush candidates as well. “I want to have quality animals. I’d rather have a few good cows over just a bunch of cows.”

Logan wants to continue with the beef and sheep operations and hopes to become a seedstock producer one day.

“I would like to get up to about 250 pairs, 360 head of sheep,” he said “I hope to be there by 2026 on the beef cattle. The sheep are very prolific, and if I don’t get a 150 percent lamb crop, I have to look at what I’m doing. I had a 200 percent lamb crop last year, which is why my herd went to 120 head. I also bought 30 head of Royal Whites. I wanted to have my own herd of sheep that I can have with my lambs to sell. I want to get into straight Angus or Beefmaster cattle. In a commercial crossbred operation, you might keep a few replacements, but you can’t do that if you want to sell seedstock.”

For this generation of Archers, farming and agriculture is part of the their DNA.

“I’m proud of them,” their father Robert said. “It’s not just showing cattle for them; it’s everything else. Logan likes to get into the tractors and work on things, and helps with fieldwork, which is great because it helps me do other stuff. Molly has taken hold of the AI program and she’s pretty good. Their mom and I never treated them like babies, and they had responsibilities when they were little. We raised the kids like we were raised.”