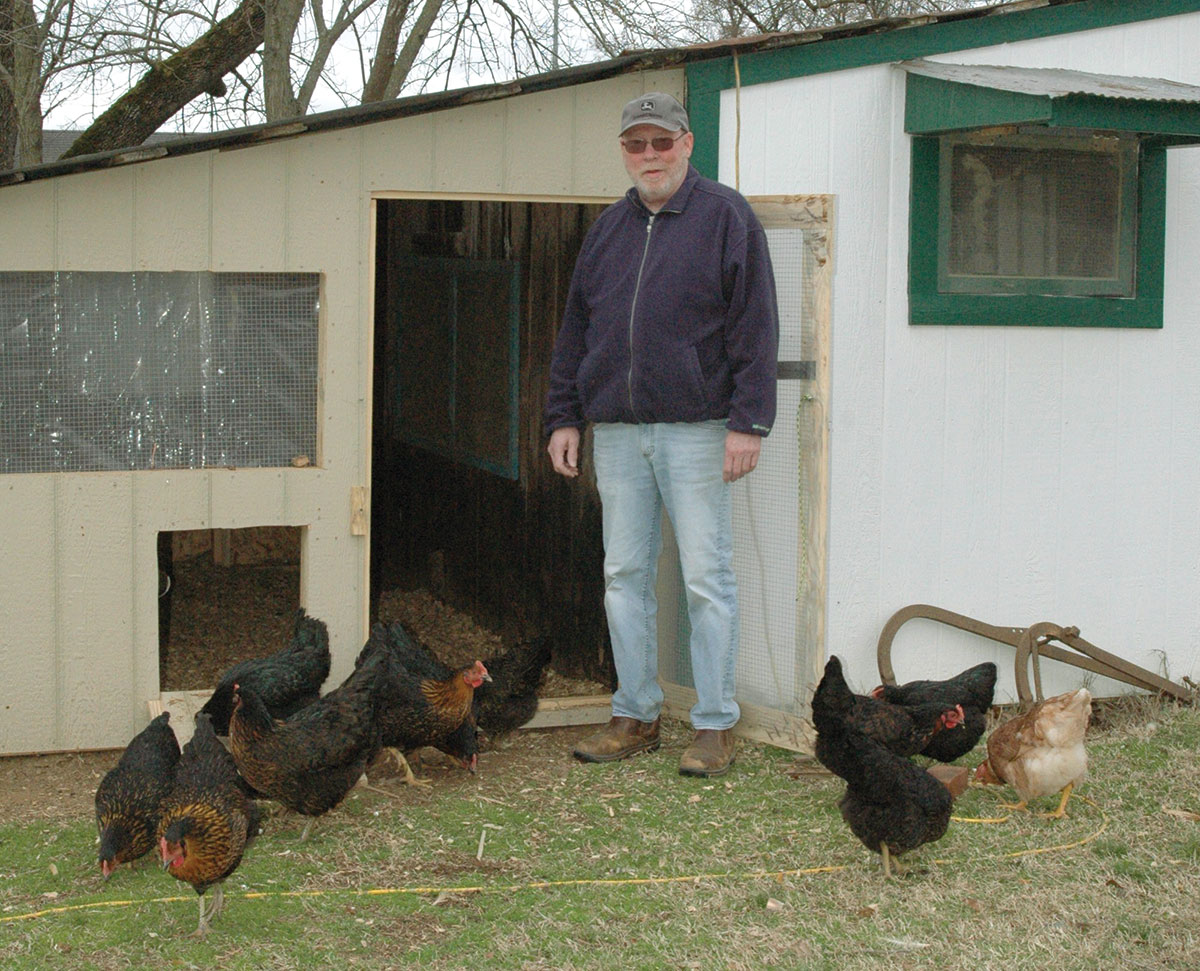 Kent and Lynn Lovell find their niche in pastured poultry

A Russellville native, Kent and his wife moved to Massachesetts for their careers. When he inherited his grandfather’s farm from his mother in 2014, they knew it was time to come home and Dunrovin Farm was born.

“My brother-in-law had given me a copy of Joel Salatin’s book on pastured poultry,” Kent said. Two years later they lost their supplier for pastured poultry. “We knew if we were going to do it, the time was [then].”

His first year was spent rehabbing his grandmother’s old henhouse, which now houses their layer flock. The following year they started supplying eggs to neighbors and their business grew. They now supply a local farm-to-table restaurant with eggs and meat. The couple’s meat products are also available to the public at the Pope County Farmers Market and through their Facebook page. They also offer larger wholesale orders.

“It’s a labor of love,” he said. “We wanted to have chicken for us and our family.” But through word-of-mouth and selling eggs at the local barbershop their business grew to include Prestonrose Brewery and the larger clientele at farmers markets.

Kent built all of his chicken tractors himself. He originally bought plans after researching online and talking to other Arkansas growers.

“You build one, and then you figure out, OK, this was wrong, and this was, so you make it work,” he said.

The sloped-roof frames are covered in poultry netting and tarp for protection from predators and weather. He has also found placing his tractors with sides touching reduces the amount of wall space available to predators to break in. He will be adding at least one more tractor this year.

“This will be our third summer so we are still learning.”

Kent recalled the first summer he had to carry ice to the Cornish Rock crosses because they would not get up to go to the waterers.

“We lost 20 percent because of the heat.”

Now he runs the Cornish Rocks in the cooler months of the spring and fall and raises Freedom Ranger Color Yield during the hottest part of the growing season. “They are more active and they also seem to have a slower metabolism, which may be why they do better in the heat.” – explaining the slower maturation of eight to 10 weeks as opposed to the fast growing Cornish Rocks that are ready at seven to eight weeks. The layers are a mix of Gold and Black Sexlinks.

Kent typically orders chicks in March and processes his last batch in November. He staggers his chick orders so a new batch is ready for pasture as soon as the finished birds are on their way to the processor. Last year, he ran four batches and this year hopes to do five, running three tractors for the first and last and four during the middle runs.

He feeds a standard flockraiser for meat birds in 40-pound feeders, along with fresh pasture. He said the laying hens are great foragers, but that he supplements them with layer ration.

The chickens work and fertilize his grandfather’s old haymeadow as the tractors are moved daily by hand using removable wheels and a pull rope. This method raises the tractors up off the ground to reduce injury to the chickens. He added when the chickens are larger they may need to be moved twice a day, depending on how much litter they deposit.

When his birds are ready, he transfers them to crates and hauls them to the processing facility.

“I use Natural State Processing in Clinton, Ark.,” Kent said.

It’s about a two-hour drive. He added that they provide a very presentable end product that appeals to customers. Processed weight is a 4 to 5 pound chicken although he says that they occasionally have had some that are 7.5 pounds and equally good quality. They offer whole birds, legs, thighs, split breasts, backs (soup packs), wings and livers.