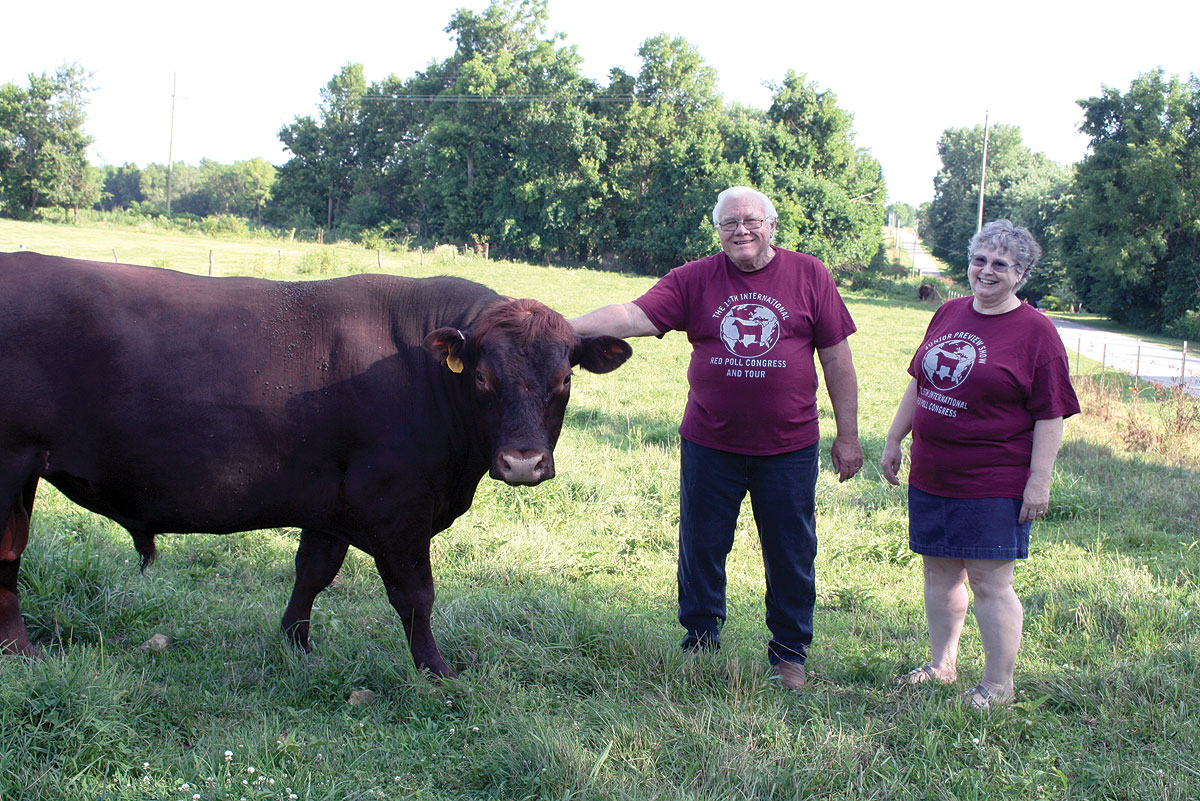 The farm landscape in Illinois is a little different than in the Ozarks, but it was in the Land of Lincoln where Ron Lake found his love for cattle – Red Poll cattle.

“We weren’t in the cattle business,” Ron recalled at his Mount Vernon, Mo., farm he shares with his wife of nearly 50 years Donna. “We were in the grain business, but my dad always brought a few calves to fatten out for the freezer. He bought a little Red Poll calf one time and I just never forgot how pretty it was. I tell people we have Red Poll and people don’t know what they are.”

Ron studied agriculture for a year in college but was called to the ministry, pastoring churches for 47 years. But he never forgot about Red Poll cattle.

After Ron retired, Donna’s job as a traveling nurse brought the couple to the Ozarks, where they purchased a small farm and began building the registered Red Poll herd Ron had always dreamed of. They started with four heifers and a bull purchased from the Curbow family in Nixa, Mo., in 2004.

Red Polls are a moderate-framed animal and are marketed as the “family-friendly breed.”

“They do really well on smaller farms,” Ron said. “A lot of people will go strictly grass-fed with their Red Polls. I am getting more into the grass-fed area, but I grew up in the Corn Belt, so it’s hard for me not to offer a little feed. The mature animals are strictly on grass, but I will give my calves a little grain at weaning.”

Weather tolerance is another factor Ron considers a positive for the breed.

“We joke with our neighbors who have black cattle that theirs are in the shade while my red cattle are out grazing when its hot,” Ron said. “They will lay down and have calves in the middle of a snowstorm without any problems.”

Red Poll beef, according to the American Red Poll Association, is naturally tender and rich in flavor, which is why it is ideal for a grass-fed program.

Rich and Donna added there have also been studies indicating that Red Poll beef also has some E. Coli resistance, which appealed to the nurse in Donna.

While there are many attributes of the breed Ron appreciates, it’s the easy-going temperament he admires most.

“I’m here by myself most of the time, so I have to do things by myself,” he said. “These cattle are so gentle that I can separate them and do what I need to do.”

Donna said Red Polls are an easy-calving breed, which also makes the breed ideal for their farm, with their target birth weight being in the 70s, and cattle require few inputs.

“We won’t keep anything with a birth weight in the 90s,” Ron said. “They are typically pretty healthy. I only vaccinate occasionally, but I worm in the spring and sometimes in the fall with Safeguard cubes.”

Calves are weaned at a minimum of 6 months. Calves may be weaned earlier if cows are struggling to maintain condition. After weaning, some females may be retained for future breeding, and bulls are offered for sale as herd sires.

The couple has also marketed animals in the National Red Poll Sale.

Being a smaller seedstock operation, the Lakes allow their herd sire to remain with the females year-round, allowing them to have calves of different ages available to customers.

“I’ve sold bulls in Arkansas, Illinois, Kansas and here in Missouri,” Ron said. “I want to promote the breed, and we are growing.”

Quality genetics are key for Ron and Donna, and they have sought out the best quality a small producer can afford. There have been times, however, when “the best” wasn’t always “the best” for their operation.

At the national sale a few years ago, Ron and Donna had their eye on a stylish heifer that had been DNA tested for the E. Coli resistance gene, and she had the qualities they wanted to add to their herd. They agreed on the price, then Donna went over that price by a few hundred dollars, and the heifer was theirs.

“She lost two out of three calves when we got her home,” Ron said. “We really kept her longer than we should have.”

There has been a movement, Ron said, in the American Red Poll Association to stump for the attributes the breed can add to a crossbreeding program, producing Red Poll Plus cattle.

“They realize that there is a commercial market,” he said. “One of the better crosses they are discovering is with Charolais, and in the dairy industry. “Red Polls were originally a dual-purpose cow, meaning you can milk them or raise them for meat. Gradually, the breed as gotten away from milking Red Polls.”

Donna added that their Red Poll bull paid an unexpected visit to a neighbor’s Holstein herd, and everyone was a little surprised with the result.

“He ended up with a crossbred heifer and he’s running her now with his dairy herd,” she said. “She’s one of his higher butterfat producers.”

Two bulls from R & D Farm have been sold to a Gelbvieh operation for it’s crossbreeding program.

“Red Poll bulls are really gentle bulls,” Ron said. “I would also say they do really well on grass, and they give those traits to their calves. I think the phrase the association uses now is that they are the natural alternative. Our neighbor used to run Red Poll with his Herefords, and that’s a really good cross. Really, just about anything crosses well with them.”

“If you’re having any issues with calving, a Red Poll bull will help,” Donna added. “If they retain heifers from a Red Poll, you’re going to increase your milk for their calves.”

While Red Polls are efficient grazers, the Lakes were forced to part with half of their herd last summer because of the drought conditions and shortage of hay, but they plan to retain their heifers and build to a level their 21 acres can support.

From Dairy to Beef