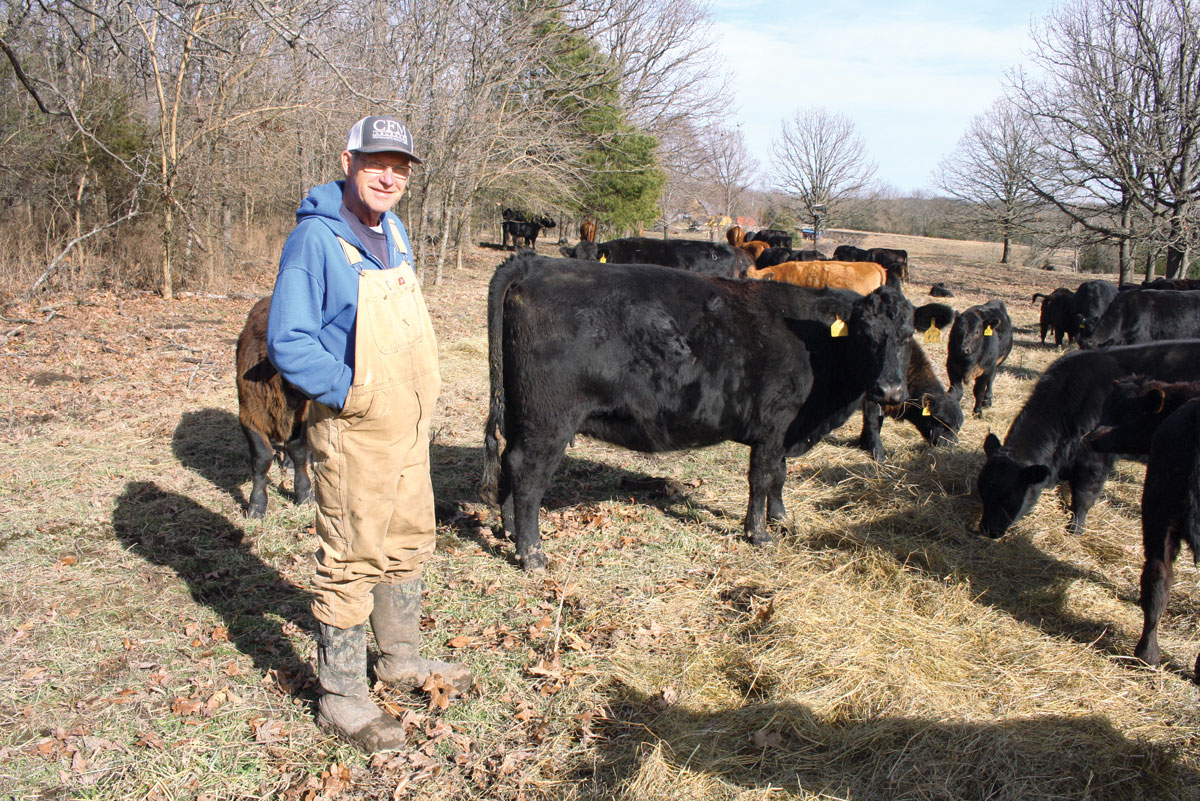 What does a high school industrial arts teacher do with all of his “free time” once he retires? He goes into the registered cattle business.

“I’ve always had cattle as a hobby,” Roger Kathka said. “I was brought up in Western Kansas and we had Angus, and they weren’t the Angus of today. They were short, stocky little boogers and weighed 1,000 pounds at the most. In the late 1960s, early 1970s, my dad went to AI school and while he was at the school, they talked about how Simmentals were being imported. The school told him they would furnish the semen if he bred some of his cows to Simmentals, and they would buy his heifers, so that’s what he did. That’s what really got me started at looking at bigger cows.”

Roger continued to raise Simmentals for several years and eventually went with a strictly commercial herd, but a trip to a cousin’s farm back in Kansas changed that.

“He had Gelbvieh bulls and I was really impressed with his calves,” Roger recalled. “That’s when I began looking at Gelbvieh.”

Roger purchased a Gelbvieh bull to service his commercial herd, but at that time the breed was still a little hard to come by.

“That was in the mid-1980s,” Roger recalled. “I finally found one. He was just off the cow, a little scrawny and had scurs. He was a little stunted, but his calves really grew out and I was impressed with that. I got five registered Gelbvieh heifers from Seedstock Plus back in 2001 and that’s my registered herd’s foundation.”

Roger now has a registered Gelbvieh and Balancer herd of 27 cows at his Red Bud Ranch outside of Buffalo, Mo.

“I’ve had pretty good luck with these cows,” he said. “I’ve always had good luck with Angus, too, but if you look at the Gelbvieh breed, it’s basically grassroots commercial guys who switched over. This breed was built for production and that’s what I have always liked about them… When you’re trying to be a seedstock producer you pay more attention to details, keep better records and get more data. When I first started, I didn’t think about carcass data until we started doing carcass ultrasounds on my stock, then I started thinking that these were some of the attributes I needed to work on.”

Roger utilizes a timed AI program and is selective about the matings for each female.

“There’s no perfect animal out there and I don’t want to get too one-sided on anything,” he said. “I don’t want to lose my maternal side because I want carcass.”

During his last breeding cycle, Roger selected about a dozen different sires for his females.

“Having that data in my AI program is a marketing tool for me because you have that calf’s background… If farming and raising cattle was easy, then everyone would do it.”

As a smaller producer, Roger wants animals that are proven to perform, so he doesn’t invest in the “next big thing.”

“I don’t like to use something new,” he said. “I can’t go out and invest a bunch of money in something I don’t know about, that doesn’t have any calves on the ground if I only have 27 cows. I want to see how an animal actually performs before I invest. I want consistency. I want to get bulls that a commercial guy can use instead of taking a chance on getting one that might not work.”

Roger markets his cattle through private treaty and is very selective about the animals he offers to other producers.

“If I don’t think they are going to do well, I will cut the bulls and market any heifers as feeder calves,” he said. “An animal has to have strong feet and legs and made right. They might have great EPDs, but EPDs are just data generated by a computer.”

About 60 percent of the calves he produces and markets are Balancers, which are produced through Roger’s AI program.

“I really like the Balancers,” he said. “I think the heterozygous influences you get with Balancers is really great. I have kept  some Balancer cows and I will breed them back to a Gelbvieh because I like that 50/50 mix, then that 75 percent Gelbvieh and 25 percent Angus. I don’t want to go the other way with less Gelbvieh influence. At times I think we are losing that foundation Gelbvieh. My biggest challenge is finding something that will add to my herd. It gets kind of risky because you can slip backward easily. I can find more Angus sires to match up with I want to do. If I’m not moving forward with my herd, then I might be moving backward.”

Bulls not sold as calves go to a grower in Mendon, Mo., in mid-April, early May, so calves are weaned between 5 1/2 and 6 months of age. Calves are offered a 14 percent protein creep feed prior to weaning to help reduce the stress. Bull calves are switched to a 12 percent grower about two weeks after weaning.

“I like to have them weaned, bunk broke and going to feed,” he explained. “If I can find a little silage, I like to get that in front of them so they know what it is.”

Because he retains his own females, Roger does not keep his bulls for his own breeding program.

In addition to his registered herd, Rogers has a small commercial herd with a partner, allowing him to move some females from the registered side of his operation.

Roger may spend a great deal of time developing his genetics, but his cattle are far from pampered.

“I run all of my cows on what everyone else has: endophyte-infected fescue,” he said. “I try to interseed clover as much as I can to combat it, but I can’t figure out how to wipe it out and put in an endophyte-free fescue.”

Roger offers mineral supplements and tubs to his herd, as well as hay when needed. He also follows a vaccination, deworming and delousing protocol.

The recent drought caused him to cut his herd by about a third last year, which were his spring-calving females.

“I needed to thin down a little anyway… I just have better luck with fall calves and getting females rebred in the fall than I do in the summer,” Roger explained. “I was kind of hesitate, but in the spring it’s hard for me to do things as it is, so when you add calves hitting the ground… I feel like I have to be around when they calve. I don’t have any calving issues, but as a seedstock producer, you still have to be around to weigh that calf and that kind of stuff. I want to be more semi-retired one day and have a little more free time, so the fall calves make more sense for me.”