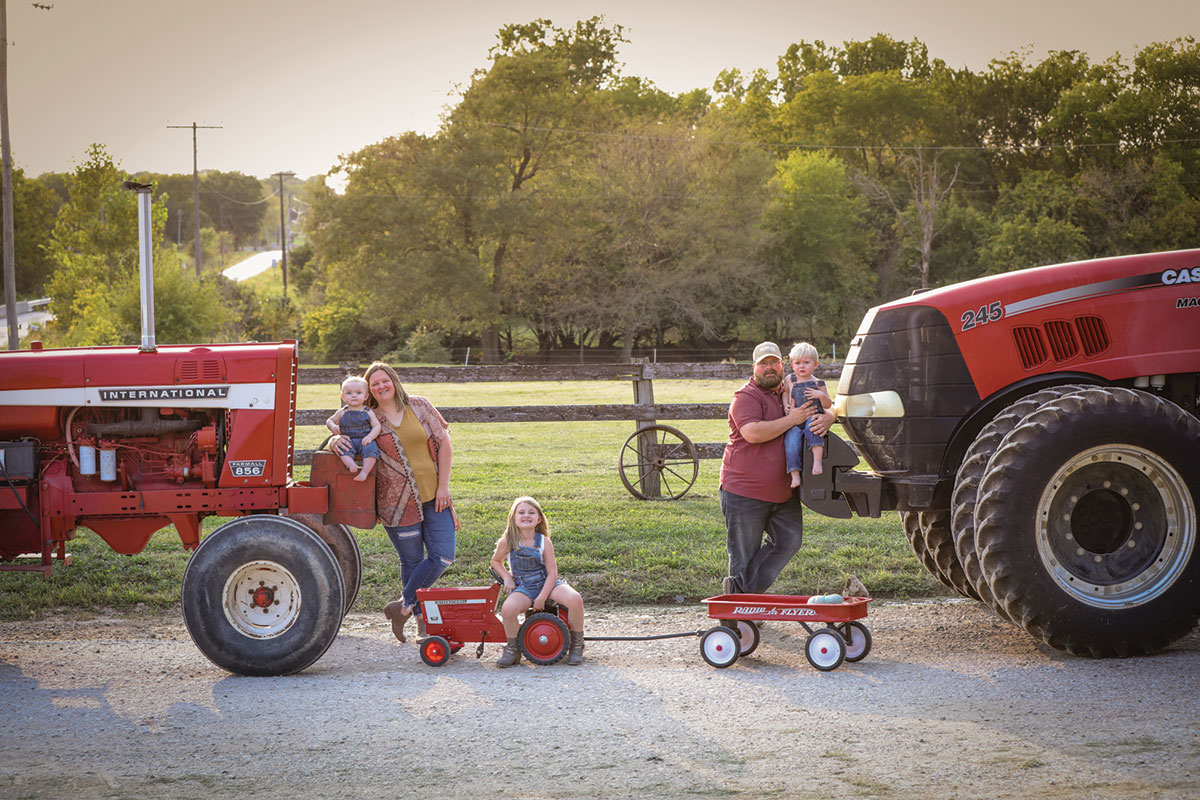 Even at a young age, Matt Kohler always wanted to be a farmer

Growing up on his family’s farm near Harrisonville, Mo., Matt Kohler always planned to follow in the footsteps of his grandfather and father.

His parents, Mike and Vicki Kohler, took over the farm from his grandparents, Neil and Evelyn Kohler, who were dairy farmers until the mid-1980s. Neil, who passed away in 2015, was born on the farm that has earned a Century Farm designation.

When the opportunity arose to expand the family’s agricultural enterprise to Amsterdam, Mo., in nearby Bates County, to a farm that included cropland and a feedlot, the family took advantage of the opportunity.

“In 2001, Mom and Dad acquired this place,” Matt said. “When I got out of college in 2004, we transitioned some of the operations here and this is where I’ve been ever since.”

Matt and his family have more than 300 cow/calf pairs of primarily commercial Angus. Calves are finished in a feedyard and sold directly to specialty processors in Central Nebraska and Western Kansas, typically at the 1,350-to 1,450-pound mark.

“We’re still looking for a market where we can try to keep sell locally in Missouri or Kansas, so we aren’t trucking them five-plus hours.”

They have also branched out to offer locker beef directly to customers.

“We would like to grow that operation,” he said, adding that producers and consumors are now at the mercy of availability of smaller local processing facility availability. “We want to have that relationship with the consumer, so if there’s something wrong, we get that feedback so we can fix it. When consumers buy meat at the grocery store, they don’t know where the beef came from and how it was fed. We think we raise great beef, but in the end, you don’t know until you cut into a steak or bite into a hamburger if it’s good or not; we want to have that quality product.”

The Kohlers have both spring and fall calving seasons. Most of the breeding is achieved through natural cover from bulls raised on the farm, but some AI breeding is performed.

Replacement heifers are pulled from the calf crop and moved into the breeding program.

“We grow them in the yard, breed them and turn them out into the pastures to calve,” Matt said. “We keep about 60 to 80 replacements a year. We’re pretty selective about what we keep, and it also depends on the cow prices. If cows aren’t worth anything and we have a group of cows that will raise another calf, we’re going to keep them. But, we do try to keep our herd young.”

The Kohlers follow a stringent vaccination protocol. Calves are vaccinated between birth and three months, then again at weaning, followed with booster vaccines two weeks after weaning. Bulls are castrated at that time, if not put back into the breeding program.

“We typically give growth hormones to our steers, but not to heifers in case they get put back into the breeding program,” Matt said. “We’re still in the market for getting as many pounds as we can and the growth hormones aid in that. However, many consumers now want grass-fed non-growth hormone cattle. It is taking time to transition to this process for our local customers. We can offer our heifers that way, but not the steers.”

The Kohler family plants corn and soy beans on about 3,000 owned and rented acres. The Kohlers irrigate both their corn and soybeans.

The goal is to get about 150 to 175 bushels an acre in corn production, then about 50-plus in soybeans, but yield totals are always dependent on Mother Nature.

“I think we’re lucky to get what we get sometimes,” Matt said. “You always have to go back to the drawing board for the next year and look at different seed varieties that may have the possibility to do better.”

Typically, crops are planted from mid-May to Memorial Day. They strive to start planting corn by April 1, beans before Memorial Day. Corn and beans are rotated. High-moisture corn is harvested around September, followed by dry corn. “Our facility allows us to dry some corn if the moisture is still a little high,” Matt said.

The Kohlers produce the feed for their cattle operations. They use no more than 25 percent of their corn acres for silage and shell high-moisture corn for feed.

“We also have a modified distillers as our main protein source for our feed ration,” Matt explained. “When you have $4.50 corn, you’d rather sell it than walk it off, but when you have $2.50, $3 corn, and cattle prices come up, you can walk it off and make some money off of it and help both avenues.”

Cover crops, including Triticale, winter cereal rye, and occasionally hairy vetch and crimson clover, are also planted on about 500 to 600 acres for additional grazing in the winter.

“There are also some winter annuals that we don’t really take care of, but they are an added benefit. We still give the cows some silage in the winter, but there are some great benefits to grazing those fields,” Matt explained. Sometimes we will come back in the spring and put some spring oats on top. We’ve baled a few acres of cover crops for dry hay and a few silage bales in the spring. I want to maximize production, but not take away from the pastures. Ground is hard to find, so we want to maximize what we can do.”

Matt and Kohler Farms have several valuable employees who help get things done.

“They are the glue that keeps this place running,” Matt said. “In the spring, I do a lot more traveling between farms, so it’s great to have them around as another set of eyes.”

Matt hopes will be run by the next generation of the Kohler family, his daughter Laney (5), and sons Neil (2) and Noah (11 months).

“They are a blessing, especially when they are going out feeding bottle calves or riding in the combine with me,” Matt added. “I want to build a future for them like my parents did for me. Watching them grow up and be a part of this is why we’re doing it.

“I would like for this farm to be the next Century Farm in the family. I hope this is what my kids want to do, but if they don’t have the same passion, I don’t want to push them to that. If you don’t do what you love, you won’t do it very long.”

Being a farmer was always Matt’s goal, but he knows if it weren’t for his family’s longstanding connection to the industry, it would almost be impossible for him to have achieved that goal.

“There may be days where I don’t want to do a job, like fixing fence in the dead of winter or checking cows at 2 a.m., but the rewards out-weigh all of that. or the cows keep getting out, but I know I’m lucky,” he said. “If it weren’t for my parents and grandparents, and even their parents, we wouldn’t be anywhere close to where we are now. You can’t just get out of school and say, ‘I’m going to be a farmer.’ The opportunities I have been given have been a blessing.”