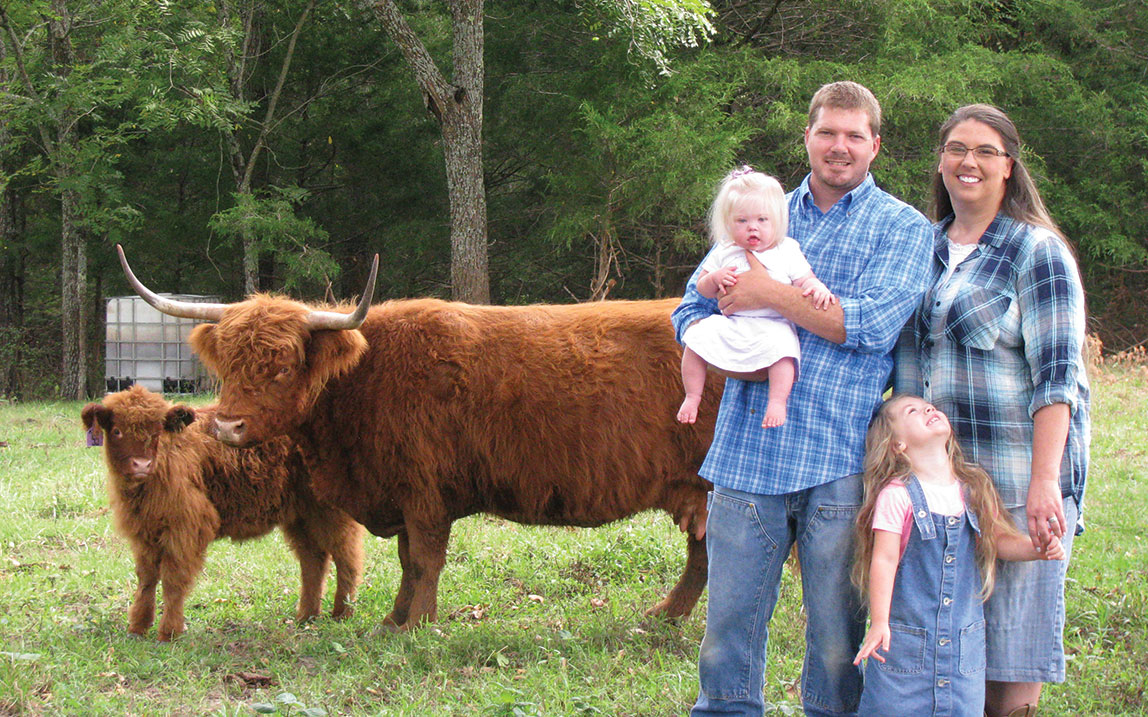 On their 28-acre farm near Marshfield, Mo., in Webster County, Adam and Larissa Michaud are raising two daughters, Kaylee (3) and Malea (1). They are also raising Scottish Highland cattle.

Adam said they bought the house in 2012 and the connecting property in 2014 and started raising Scottish Highland cattle in 2015. Besides utilizing their land, they also rent and “borrow” land in three other locations, all within a 15-minute drive.

Thriftiness, hardiness and small size are the appeal of Scottish Highlands for Adam.

“They will browse on brush and leaves that commercial cattle leave behind. They still mainly eat grass, but they’re good for cleaning up woods for that reason. The smaller size allows me to stock more per acre and right now they bring more than commercial cattle. So that makes them more profitable per acre,” he explained. As for hardiness, “they don’t frequently get sick. They’re basically unchanged since they came over from Scotland hundreds of years ago. They haven’t been bred up for specific traits. A lot of commercial cattle lose hardiness when you breed for specific traits,” Adam stated.

Adam grew up raising Holstein bottle calves. After he and Larissa married, he wanted to have cattle again.

“I did a bunch of research to select the hardiest breed I could find because the Holsteins were the opposite of that,” he said.

The Scottish Highland’s hardiness and small size were two major factors when Adam bought them.

“My original plan was to buy Scottish Highland cows and cross commercial bulls onto them, but I fell in love with Scottish Highlands so much that we wound up switching out to mostly registered in our breeding herd,” Adam said.

“The Heartland Highland Cattle Association puts on an auction every spring. It started in Norwood, Mo., and now it’s in Lebanon in April every year. They also put one on in Parsons, Kan., in December. The spring auction is where we first got our start into them and then we met other breeders and bought some more. That’s how we got our herd,” Adam said.

Adam serves on the Heartland Highland Cattle Association Board of Directors.

“We now have an open registry, so previously unregistered purebred Scottish Highland cattle can be registered into the Heartland Association, and we’re working on a DNA breed test to go along with that,” he said.

He has around 30 to 40 head of cattle in his herd, depending on what’s coming in and what’s going out. He has a registered herd of about 10 head.

Adam sells his cattle mostly through his Circle AM Cattle Company website, which promotes his grass-finished beef and breeding stock.

“We have more demand than we can supply with the amount of ground we have, so I work with some other farms, buying from them and selling online,” he explained. “Highlands are becoming more popular. This year we will likely sell around 200 head,” he added.

Within the past year, he has sold into 12 different states, from New York to Texas, Alabama to Montana, and a lot of sales in Missouri.

“Sales really picked up in March and April. When commercial cattle were going down, my sales went through the roof. Near as I can figure, people got a shock from store shortages on things and realizing how dependent they are on the system. People who maybe didn’t farm at all realized they wanted to supply their own beef and this, being a good start-up hobby breed, maybe drew them to it. I don’t know for sure. It has stayed consistent since early spring,” Adam said.

Many people are drawn to the Highlands because of their unique look, including the breed’s long horns, furry coat and smaller size.

“Some people consider the horns a drawback. Some people love them. One somewhat unique problem to Scottish Highlands is fly strike on newborn calves. In the first few days, if they’re not cleaned off very well, flies lay eggs, eggs hatch into maggots, and the maggots will crawl in and out of their skin and irritate the calf like crazy. It doesn’t happen every time, but if I have one born during fly season I try to get to it and treat it within the first 24 hours to prevent that from happening,” he added.

If someone is interested in raising Scottish Highlands, Adam recommends finding someone that raises them and visiting their farm.

“Get to know them. Ask questions. Maybe there’s specific things in their area they need to know. The biggest thing is build loading facilities, because you never know if one’s going to get sick. You need to be able to load it up and get them to the vet. Even if you don’t have working facilities, you need to be able to load it. A lot of people buy them without any facilities at all, and it causes a lot of problems,” he explained.

Scottish Highlands aren’t for everyone, or for every operation. They are slower maturing and take longer to finish.

“A lot of commercial farmers steer away from them because of that,” Adam said. “They are good for hobby farms and for people producing their own meat. They have very good meat,” he added.

Adam is very happy with his Scottish Highlands. “Right now, profit per acre, I make more than I would with Angus,” he stated with a smile.