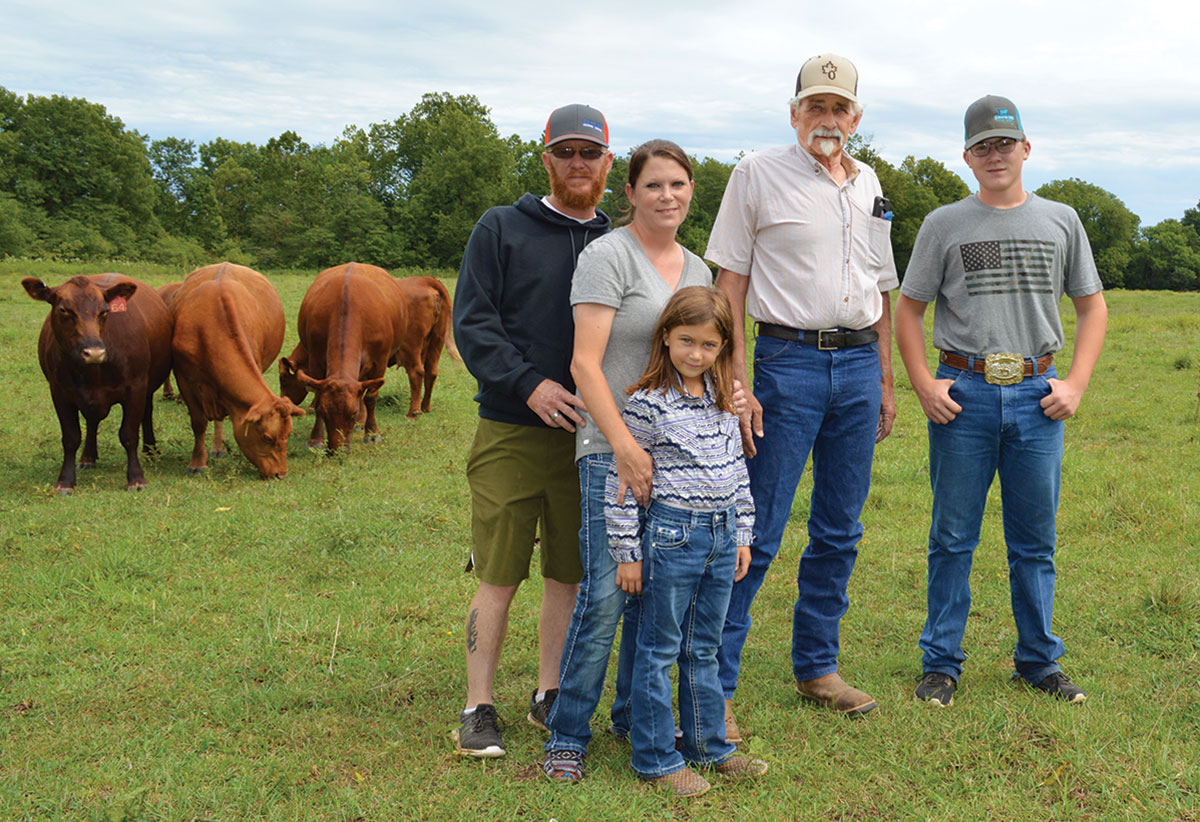 Family joins together to breed high-quality, registered cattle for the farm and the show ring

While on the road for work, John O’Dell seized the opportunity to visit some of America’s finest cattle operations.

Now in his retirement, John uses those experiences to guide his selection of animals for his Red Angus and Simmental herds on his farm in Fair Grove, Mo.

“It’s all about leaving a legacy for my grandkids,” John said. He’s building that legacy on his 215-acre farm, that’s been in the O’Dell family for more than 100 years.

The focus on buying quality registered Red Angus and Simmental cattle started four years ago, when Ely expressed an interest in showing. John started purchasing genetics from some of the breeders he visited during his travels. His herd reflects influences from cattle operations in North and South Dakota, Wisconsin and Canada.

When selecting females for his cattle operation, Hat Creek Cattle Company, John evaluates their weaning weight, calving ease, milk and their feet and legs. He searches for females that will bring home banners and produce future winners.

“We look for heifers that will be good cows,” John explained. “They can only be show heifers for a couple of years at best and then the next 10 to 12 years they are going to be cows.”

John and the Dukes place a heavy emphasis on proven cow families and strong maternal pedigrees.

“They say a bull is half a calf, but I think it more 70 percent the momma cow,” John stated. “A momma cow is more influence than the bull is. Most of the time your calves will look more like the cow than they will the bull.” Even when searching for an AI sire or herd bull, the focus remains on the part of the bull’s pedigree that reflects maternal traits.

In addition, John and the Dukes specifically select sires with solid bone structure.

“Red Angus are more likely to be finer boned,” Steven said. Therefore, all the bulls they use must have excellent feet and leg structure.

“It’s all about getting the feet and legs to climb the hills. That’s what all the breeds are looking for now – feet and legs are an important thing,” John added.

The family got interested in the Red Angus breed thanks to the guidance of John’s nephew, Danny O’Dell, who’s a longtime Red Angus breeder. The family connection coupled with the growing popularity of the breed were factors in their decision to build a Red Angus program.

Along with managing a Red Angus herd, the family is building a Simmental program.

The reason for the two breeds is simple.

“We are not going to let our kids show against each other unless they want to. That is why we have both breeds,” Steven said.

The show cattle stay with the Dukes at their farm, Double E Farms/Dukes Show Cattle, in Billings, Mo. Ely and Ema work with their show calves daily. Their dedication to the family farms includes helping whenever needed outside of the show barn.

On a cold March night, one of Ely’s cows calved near a river bottom and the calf slid into the freezing river. Ely stayed up all night working to keep the calf warm and alive. That calf made it into the Dukes show string this season, finishing the summer as the grand champion Bred and Owned Female at the Missouri State Fair Red Angus 4-H Show.

“It is rewarding when you win. It shows you that all your hard work pays off,” Ely said.

A lot of the decisions made by Hat Creek Cattle Company and Double E Farms/Dukes Show Cattle focus on producing show ring success. For example, the family chooses to calve most of its females in the fall. “We don’t have many spring calves. We try to make it where we have September and October calves – so we can show them for two years,” Steven explained.

Currently the family operates with 45 momma cows, a majority are Red Angus and the rest are Simmentals. They AI to nationally award-winning bulls and then run a cleanup bull. In addition, they use embryo transfer and in vitro fertilization on their top females to improve their rate of genetic gain.

They have purchased a lot of their cattle from leading producers in the North. John takes measures to ensure his cattle ease into the warmer climate in Southwest Missouri. “You move cattle with the sun,” John explained. “If you bring cattle from the North to the South you do it in the fall when the sun is going back down. And you take them North in the spring. That’s the rule of thumb I have always heard.”

Through the years, John has leaned on the wisdom passed down to him from his father and grandfather. Just as they did, John bales all his own hay. “Over the years, we never sold much hay. Granddad always said the best insurance against the drought is a barn full of hay. So, we always try to keep enough hay to get through the winter and a dry summer,” John said.

When John reflects on goals for the family farms only one thing comes to mind – creating a herd of excellent cattle for his grandkids. “Ely and Ema are the fifth generation to run cows on this farm and not many people can say that,” John added with a smile.