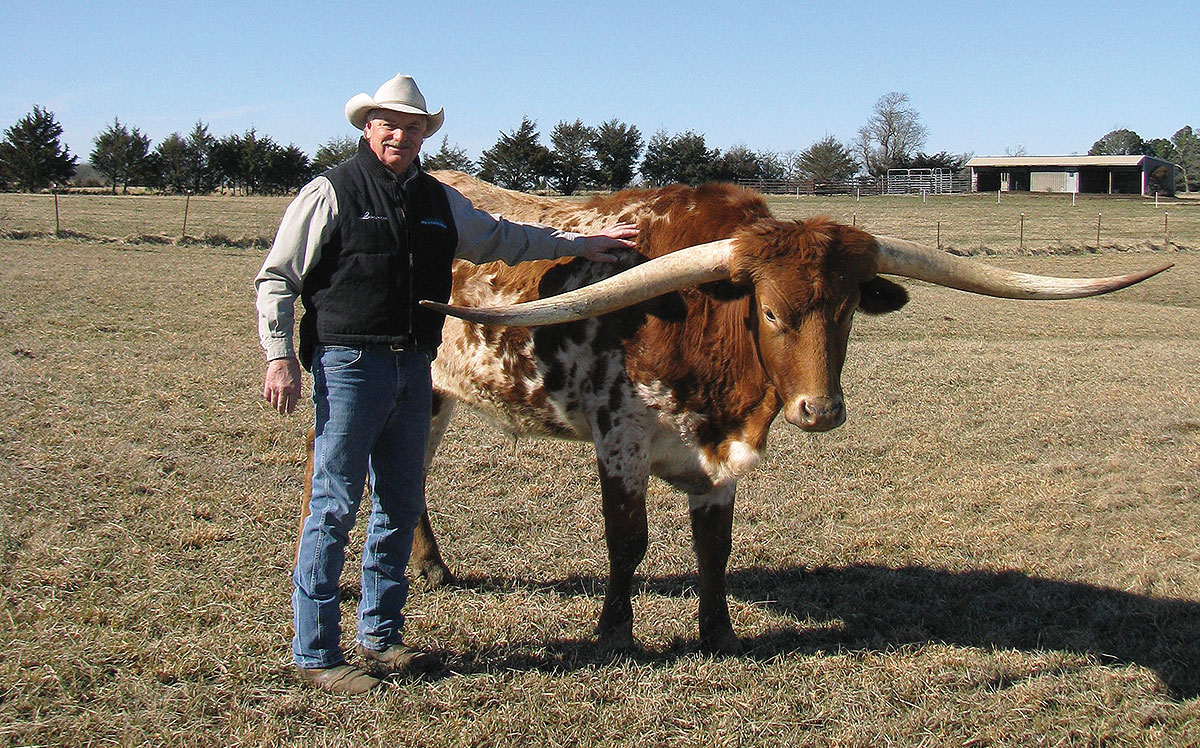 Roger Cole has been a veterinarian for 45 years. His farm, and practice, is located near Marshfield, Mo., in Webster County.

For the past five years, Roger has been raising registered Longhorns. He was attracted to the breed because he used to team rope and was impressed with the Longhorns.

“I saw how they’d gain and do good on a little bit of feed. So I started raising some so we could rope on them. It has mushroomed from there,” Roger explained.

Registered Longhorns are a little different than a lot of the commercial Longhorns.

Roger explained other producers are taking advantage of the maternal characteristics of the Longhorn; like longevity.

“A lot of times you will see a 15- to 20-year-old Longhorn cow that will raise a dozen calves for you. They have a lot of calving ease. They milk well,” Roger said.

“Many times people think of Longhorn cows as something you’re going to breed to a beef bull. They don’t really appreciate, or know, there’s registered Longhorn cows and commercial Longhorn breed associations.

With several registered breeders in Missouri, Roger considers himself an advocate for registered Longhorns.

“They have two national associations, and Missouri is well-represented. A lot of people don’t know there’s a lot of registered Longhorn breed herds in Missouri,” he said.

In Roger’s opinion, the biggest misconception about Longhorns goes back to the heyday of the TV westerns.

“They all look like the old ‘Rawhide’ Longhorns; the old skinny, bony Longhorns. I don’t think Longhorns are considered beef animals, like the Angus. That’s a misconception because they make great beef,” Roger stated. “They are high protein and low cholesterol.”

The ITLA and TLBAA are working to reeducate people about Longhorn cattle.

“They’re really a beef breed. We’re breeding bigger, meatier Longhorns. The associations have futurities we can show heifers and steers in. They are trying to promote this beefier Longhorn,” Roger said. “By using AI in our breeding program, we have been able to improve the maternal characteristics, like milking ability, to get our 800-pound cows weaning off a 500-pound calf with lots of frame and meat. We also get the color, unique horn and own a piece of western nostalgia.”

Elite Futurity in Enid, Okla., is promoting the beef end of the Longhorn. They have new focus on EPDs, rib-eye ultrasound and DNA markers for marbling.

“They are trying to get a basis for EPD genetics, so we can AI and use better genetics trying to breed a beefier animal,” Roger explained.

He has 10 registered Longhorn cows, 10 heifers, and some calves. He has a cow/calf operation, raises replacement heifers, trophy steers and freezer beef.

“They (the associations) have registered breed sales and most of the futurities have sales. I like to take a couple head to the futurity and a couple to the sale. We try to donate a steer to the youth every year,” Roger said.

The Longhorn associations also have a great youth programs.

“Longhorns are very gentle,” Roger said. “That’s one of the reasons they have such a big youth program. The youth can handle them. It won’t be unusual to see a big 7- or 8-foot Longhorn cow or steer being led by a 4-year-old kid on the halter, showing them,” he explained.

Trophy steers have long horns and “a lot of people will buy these and put them out in the front yard. The trophy steer business is a big deal and they have a contest for that,” Roger stated.

You can’t talk Longhorns without discussing those impressive horns, which continue to grow all their life.

“Most of the growth is in the first two or three years,” Roger explained. “We have a cow that is 20 years old. I have measured her, and her horns are still growing about an inch per year.”

Roger wants the total package in his registered Longhorns.

“It’s one that has lots of color, lots of horn, lots of body,” he explained.

When a calf, usually a heifer, is between 6 to 18 months old, you can take it to the futurities. They have different classes depending on age. They have grand champion and champion.

“They are trying to judge Longhorn heifers that will have lots of horn, lots of color, lots of conformation. It’s a futurity for young heifers,” Roger explained. They also have steers in the futurity.

Roger attends and participates in these shows and futurities.

“We went to the ITLA World Show in Sulphur Springs, Texas, last year and thought we represented Missouri well,” he said.”

There were over 500 entries, and 14 states represented. Roger came back with four grand champions and three futurity winners.