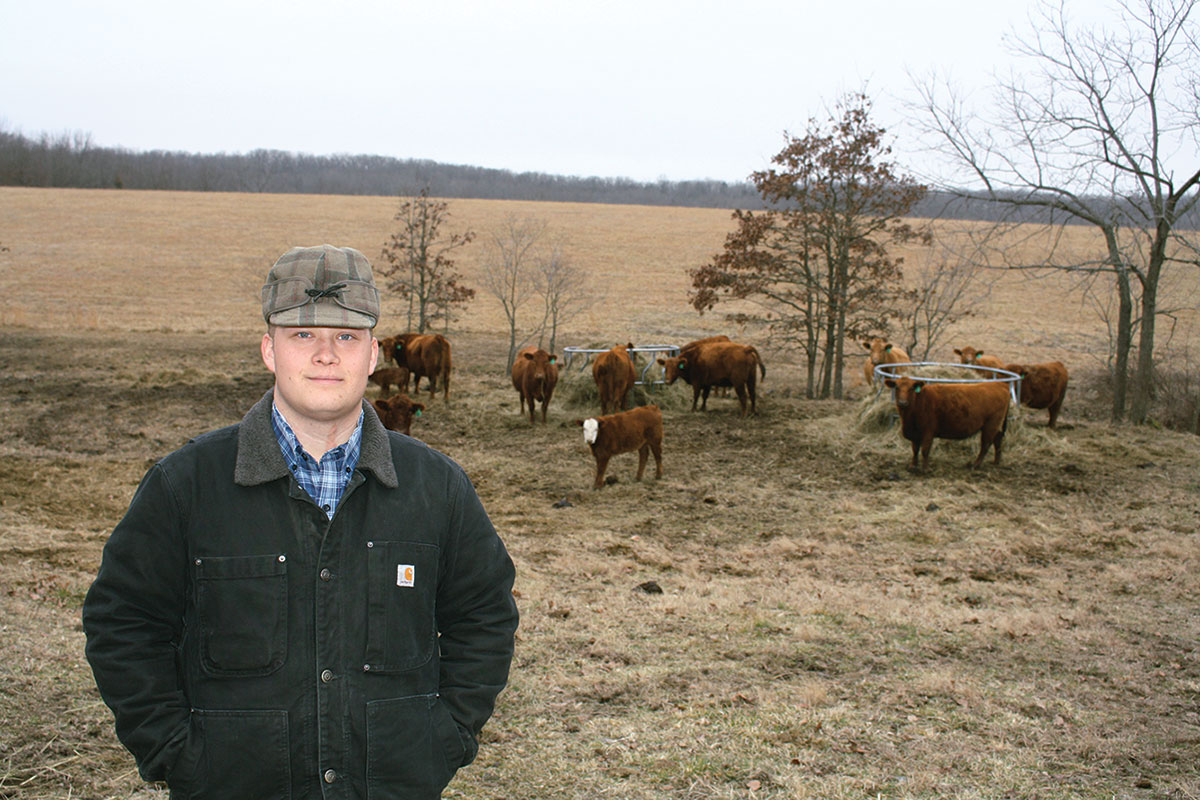 Eli Rogers’ family was in the registered Hereford business for decades. His father Larry said Herefords were the only cattle he had ever raised. As he got older, Eli continued to enjoy raising cattle, but he wanted to branch into a different breed.

“I went with commercial Red Angus,” Eli said. “For me, I didn’t want to mess with the paperwork of registration, tracking birth weights, tracking the dam and sires, and the hassle with it, plus there are the registration fees and association memberships. People around here aren’t necessarily paying more for registered cattle, so I decided to go with commercial cattle. I’m fond of red, however.”

Marketability of Red Angus, Eli said, is the main reason he branched into the breed.

“To me, Angus cattle sell better than Herefords,” he said. “Herefords used to be big around this area, but people seem to be going away from a red-white face. Everyone has gone to black Angus, so I wanted to be a little different. If it’s going to be Angus, I would rather it be a Red Angus. I guess a little of the Hereford rubbed off on me.”

Eli started with a group of 20 bred heifers from Oklahoma and has raised his new herd sire from that group. Before the bull reached maturity, Eli utilized his family’s Hereford bull. This year’s calf crop will be about half pure Red Angus and half Red Angus/Hereford cross.

“The Red Angus might be a little. hardier than the Herefords,” Eli said. “We didn’t have a lot of problems with the Herefords, but we did have a little problem a time or two with pinkeye in the Herefords. Since I went to Red Angus about three years ago, I haven’t had any issues at all.”

Because Eli has a full-time job away from the farm with MFA Farm & Home in nearby Urbana, Mo., and his parents are retired from the farm, for the most part, having a healthy, manageable herd is essential. The base of that herd health is nutrition.

“I make it a point to keep out good mineral,” Eli explained. “It has FesQ MAX in it to help with fescue toxicity, and I feed a mineral that has natural supplements that help as well. In the spring, I feed mineral with Alosid to help with fly control. A good, solid mineral program and nutrition program alleviates most issues. I also try to keep good quality hay for them.”

The herd is also offered grain every few days, which Eli says has many benefits.

“It helps keep their attention so I can walk through them to make sure they are all doing well,” he said. “They also come when I call them. I like to have an easy, smooth operation. Also, if there is any trouble or a problem, they are much easier to work with.”

Health protocols are simple for Eli.

“I’m not big on doing yearly vaccinations,” he said. “To me, worming them a couple of times a year is all they need. I don’t vaccinate for lepto, blackleg or other give vaccines and only treat when I need to; I want to keep more of a natural approach. If I need to treat an animal for a sore foot or something, I will. I think when I do have to treat an animal, the LA-200, or whatever, will work better because there is no chance for a built-up resistance.”

The family hopes to launch the retail side of their farm by the end of 2021, but any sales will hinge on USDA-inspected meat processing availability.

Calving usually begins in February for Eli’s herd, with a 90-day window.

“I like calves in late winter and into early spring,” Eli said. “Spring can be wet or hot. Also, you don’t have the fly issues and less stress on the cow. Having calves together also makes it easier around sale time because the claves are all about the same size and weight.”

Heifers and steers are weaned at about six months, then fed for about two weeks before being sold at market.

“I don’t hold them much longer than that because I like to have a turn around on them,” Eli explained, adding that fence line weaning reduced stress during the weaning process and helps calves become more acclimated to going to a feed bunk for feed. “They don’t lose as much weight. It makes it easier on the calf, the mother and us. It makes everyone happy, for the most part. I’m a common-sense person, so I do things in a common-sense way, and it’s worked for me.”

Eli has not retained many heifers at this point, opting to purchase “three-for-one” packages.

“When I go to sell calves, I’ll buy a bred cow with a calf on her side,” he said. “If you can buy one with a calf that is bred back, it helps jump-start you. The cost also works out in the end because you can sell that calf in four or five months, which helps to pay off that cow. You can also look at that cow, see the kind of calf she has, what her udder looks like and how she’s tending her calf. You can see if she will be a productive cow for your operation.”

The introduction of new genetics on the female side of his operation also allows him to keep his bull a little longer.

Some of his fellow producers may not agree with what Eli does or doesn’t do with his herd, but the 24-year-old cattleman said it’s all part of his plan to help keep his herd economically feasible.

“It’s all about operational costs,” he said. “I don’t spend as much money as someone else would, but my cattle are healthy. We have talked about AI over the years, but for the most part, I’m happy to keep a bull on them because I would have to have a cleanup bull anyway. I want to keep things cut and dry. A low-end approach can work if you use common sense. This is how people raised cattle years ago, so I’m mixing new ideas and old-fashioned ways. I take the best of both worlds with an easy approach, but keeping new products in front of them.”

The Rogers family moved to their current farm two years ago. The move to the larger 160-acre from their original farm in Preston, Mo., was to help Eli expand his operation. Misty and her husband Larry were also still raising Herefords at the time.

“I’d like to grow to about 50, 60 head,” Eli said. “I would like to try and buy up more land for pasture. I’d like to see myself raising cattle full-time with 90 or 100 head. That’s my end goal, and to keep growing and developing the farm.”

Since moving to their Cross Timbers location, the family began to improve pastures and hayfields with commercial fertilizer and have begun eradicating brush and weeds with GrazonNext.

“If I can get the ground producing right and get the quality of the grass and hay up, it’s worth the investment in the long run,” Eli said. “It will be more economical because you don’t have to invest money into grain to make up the difference in what they are lacking. It helps with the overall quality and health of your cattle. Without the grass, you can’t have the cows.”

Fields and pastures are predominately fescue and native grasses, which Eli wants to maintain.

“Native grasses are very hardy,” he explained. “I wouldn’t mind incorporating some other grasses, but I don’t want to crowd those grassed out because they are naturally drought tolerant, have better heat resistance, and you don’t have to worry about fescue toxicity. I would like to have a thicker stand of native grasses, which goes back to that natural way of things.”

Misty said she and Larry haven’t given up on registered Herefords in the Rogers family.

“I keep saying I’m going to get my Herefords back one of these days,” she said with a laugh.

Eli said as time goes on, he may consider raising a few Hereford bulls to offer to other breeders, but his main course is going to be Red Angus.

“The commercial Red Angus will pay for the registered Herefords,” Eli said.

Misty added that she and Larry are proud of Eli and his determination in the cattle business.

“If it weren’t for Eli, we couldn’t stay on the farm,” she said.

Eli credits his parents for his love of the cattle industry.

“This has all come from what they have taught me and they are the reason I am who I am,” he said. “I see how happy raising cattle has made them and how well they have done with it. To me, that’s motivation and encouragement, and why I love it to this day. I wouldn’t worry about anything if I could just stay here and raise cows.”