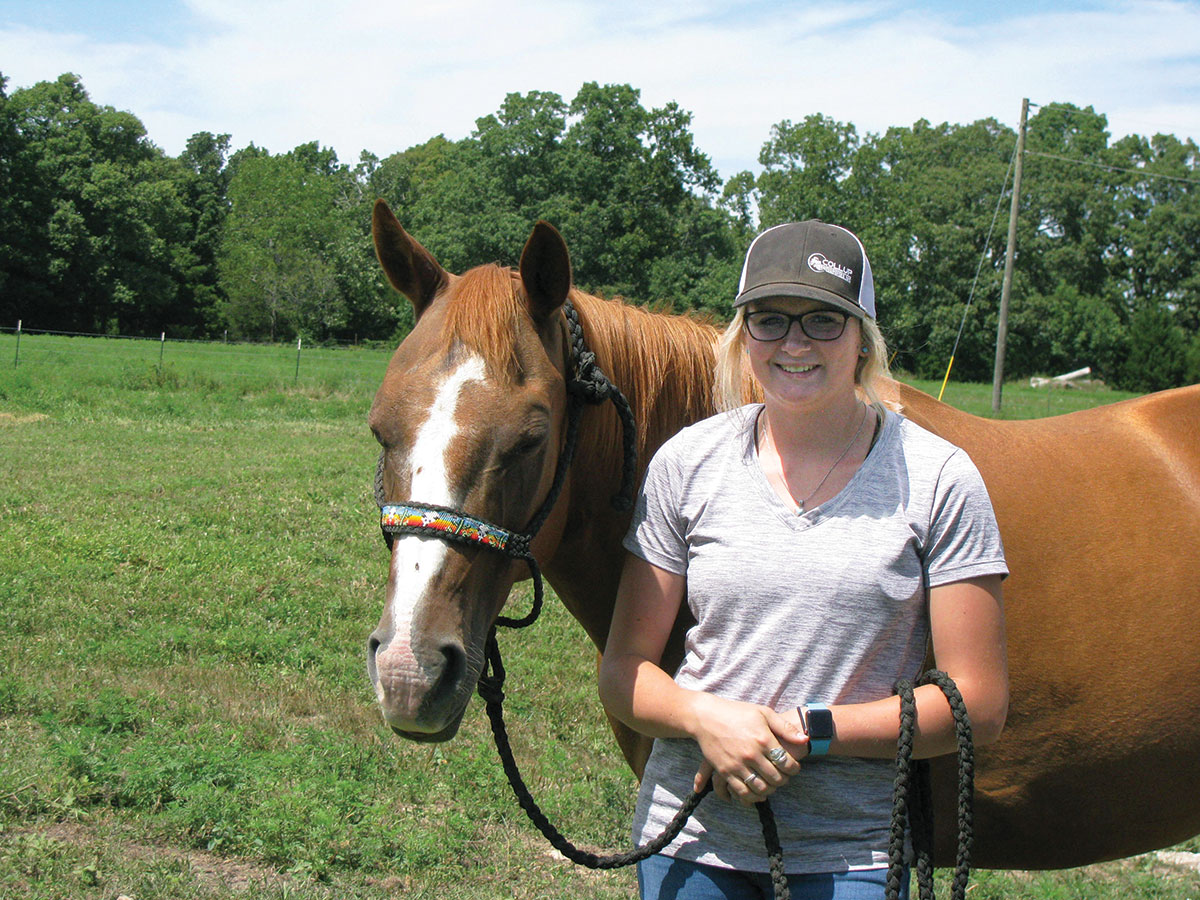 Twenty-year-old Shelbi Ballard lives on a farm in Webster County, near Fordland, Mo. The daughter of Marci and Brian Ballard, she has been interested in horses since she was a little girl.

“My mom used to barrel race and rodeo, so we’ve had horses since I was very little,” Shelbi said.

Shelbi started riding as soon as she could.

“My mom had me in lead line classes and she’d ride beside me when I was 3 or 4. I was probably 6 when I did actual competing. I did barrels and poles,” she stated.

Shelbi competed at the Rogersville Saddle Club and an arena in Fair Grove.

Her competition came to an abrupt halt when she was 8-years-old.

“We were doing AYRA (American Youth Rodeo Association,” Shelbi recalled. “I was practicing at the neighbor’s house. We had been practicing probably an hour, and I asked to go one more time,” Shelbi said.

One more time was one time too many.

“I came around the third barrel and when I turned third barrel, he (her horse) bucked with me. I fell off and landed underneath him and his back foot came down on my face. He landed on my cheek. When I cry, I still have a scar,” Shelbi explained. “I had a hole in my lip, cut up my nose, my eye socket was fractured into six pieces, I fractured part of my skull, my cheekbone was broke.”

Shelbi’s mother was there and saw the incident unfold. Shelbi was airlifted to Mercy Hospital in Springfield, Mo.

Shelby had a hematoma and an air pocket on the brain. Sent home on a Thursday, Shelbi returned the following Monday for surgery.

“I ended up having 70 screws and eleven plates in my head,” she said.

Her accident remains a mystery.

“We still don’t know what caused him to buck. He was my grandpa’s horse, and me and my sister had rode him a lot. He’d never bucked with anybody and never had any issues. So we don’t know what the issue was. It was just a freak accident, I guess,” Shelbi stated.

Shelbi’s mother wanted to sell every horse on the place after the accident.

“My grandpa, her dad, would not allow that, because he knew us two girls would not be able to handle it. My dad was pretty good with it all. He was probably the better of the two to let me ride again,” Shelbi explained.

Her love for horses shone through the weekend she came home from the hospital, before her surgery.

“I wanted back on. My parents wouldn’t let me. My mom actually set me on one of her old, old horses and let me sit on her,” Shelbi recalled.

After she recovered, Shelbi estimated probably two or three months, her mom got her a new horse; an older mare.

“My world revolves around horses. I’ve always realized the danger they can cause, but I don’t really have a fear with it,” she said.

It’s difficult for Shelbi to explain why horses are so special to her.

After high school, Shelbi worked at a couple of banks, then as a dispatcher at an auto salvage. She got the opportunity to work at a Thoroughbred farm and, “that’s one step closer to not being in an office and to working with horses every day,” she said.

Her boyfriend, Brady Collup, trains horses. Working at the Thoroughbred farm, Shelbi handles mares and colts all day. When she gets home, she takes care of their horses. Right now, she has three.

Her best advice for anyone wanting to compete in barrel racing is a saying she has heard many times.

“Slow is fast and fast is slow,” she said. “The more you work at it and the more accurate you are, the faster you are going to be. If you just go in fast, you’re going to end up being slower than the people that do the slow work at the beginning. Don’t ever skip the slow work and always trust your horse.”

Shelbi would eventually like to become more involved in horse training.

“I’m still learning a lot. I’m not at the point yet to get out and train for other people. I would like to be more of the barrel horse trainer,” she stated.

The New Breed on the Block?

Rebels with a Cause