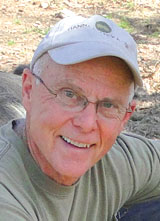 Life’s is convoluted and complex with Will and Waltina Hanna of Bentonville, Ark., being good examples. They went to their high school prom together because Waltina and Will’s sister were best friends and his mother insisted. The couple lost touch for many years, but reconnected 22 years later when Will’s sister returned for a party celebrating Will’s father’s retirement from the California Highway Patrol.
Will and Waltina, originally from California, have four children, seven grandchildren and one great-grandchild. Eventually their son Brian followed a girl to Arkansas, got married and had children. Later Will and Waltina  followed, as did their other two sons, Nile and Mike, and their families.
One of Nile’s children, Aiden, was allergic to many foods, especially eggs. Always interested in public service, the energetic couple turned their attention to food, how it was produced and the effects of different raising techniques on livestock and eggs.
“We wanted to help Aiden and fell down the rabbit hole of eating healthy,” Will said with a laugh.
Looking toward the next chapter in his life, Will used knowledge of the area gained by being the Benton County Fire Marshal to hunt for farm property.
“We prayed before we started,” Will said. “If anything will strengthen your life with the Lord, it’s the challenge of agriculture.”
During the hunt, they found a barely visible “For Sale” sign nestled among some weeds, another of life’s twists. They called and bought the land, 35 acres in all. The land was seriously overgrown with two ponds, perimeter fencing and an old house. They tore down the house, started brush hogging and built both a shop and barn, as well as new house.
Next came decisions about what to raise, believing large animals like cattle were out of the question in terms of safety. Because of Aiden’s allergies, Will and Waltina decided to experiment with eggs and have 22 hens of different breeds. The birds have free run during the day and roost at night in a secure pen. While they have access to laying pellets and pig feed as they roam, they strongly prefer scratching for insects, which helps keep the tick population under control, and other naturally occurring food.
The results for Aiden were startling. Fearful of an allergic reaction, his parents first fed him just the white and later the whole egg. He had no allergic reaction and can now consume his grandparents’ eggs without concern.
“We have no data that determines how and why these eggs helped Aiden and some of our other customers, but the fact is that they did,” Will said.
The largest section of the Hanna Family Ranch operation is devoted to raising heritage hogs. They began with three purebred and registered Large Black gilts and one boar. This breed is known for highly appealing flavor, as well as docility. Next, they added Berkshires, which produce a larger loin and are also docile. The couple is currently running an experimental cross of Large Black gilts and a Berkshire boar to see if the meat matches the Large Black’s flavor with a larger loin size.
Both species are pasture pigs though they are supplemented with a custom designed and mixed feed available on a self-select basis. While they eat grass, they also love to forage in the forest and root for grubs. Because of a lower mortality rate, the sows are brought under cover in the barn one week before delivery. The herd typically has 8 to 10 breeding females and two boars.
Local chef Steven Brooks dropped by the farm to see their pigs one day. This led to sales not only to Steven but to other chefs as well. About half of their sales are now wholesale, with clientele including Yeyo’s Mexican Grill and the Doubletree Hotel in Bentonville, as well as food trucks.
“The retail customers include mothers who bring their children to see the animals while purchasing pork,” Will said. “We were part of agri-tourism before we ever heard the term. Children never tire of the large, playful pigs, busy chickens or recently added sheep.”
The couple decided to add Katahdin-influenced sheep. They have 12 ewes and one ram with all of this year’s lambs sold to a single chef before they hit the ground.
The sheep are the workhorses of the Hanna Family Ranch. Fertilizing: the sheep do it. Herbicide control: the sheep do it. Parasite control, the sheep do it through rotational grazing. Making money: the sheep do it because they are easier on the ground and take less time to reach market weight.
The Hannas believe in helping people eat healthier by supplying healthier products. Their methods are so environmentally and animal friendly that they have received the Animal Welfare Approved certification, belong to Arkansas Grown and, due to Will’s service during the Vietnam War, Homegrown by Heroes.
The couple is looking to add produce in the future with herbs being the most likely candidate.
“The more our society knows about its food and how it is raised, the better choices they can make. Though we need to make a profit, we strive to keep our prices as low as possible,” Will said.