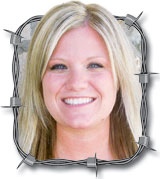 Summer traditions. For some, summer traditions may be loading up and going to the lake on Memorial Day or family barbecues on the Fourth, but for me, summer just isn’t summer without the Louisburg Picnic.
The Louisburg Picnic, officially called the Old Settlers Reunion, has been the summer social gathering in Dallas County, Mo., for more than a century.
For those of you unfamiliar with the picnic, it is hosted by the Louisburg Lions Club the third weekend each July, starting on Thursday night and running until Saturday night, with a wristband ride-day on Saturdays. Locally the picnic is famous for their fish sandwiches, carnival rides, live entertainment and bingo.
As a kid, every summer memory includes the picnic. Our family would load up starting on Thursday night, rain or shine. For us kids, it was one last chance to see our friends before school started a few weeks later or in some cases it was the only time we would get to see some of our friends for the entire summer. When you live in the country and both of your parents work off the farm, having summer play dates isn’t always very easy. So the picnic was a way to hang out with friends for three days straight.
The picnic is about more than just friends with the majority of my family attending each year. When I was young my great-uncle Tom, who lived with us, would also go to the picnic. He looked forward to it each summer as much as we did. He loved to sit and listen to the live music and watch my sisters and I have the time of our lives. He was also good at giving us a few extra bucks when we would run out of tickets.
Uncle Tom passed when I was 16, but I remember how strange it felt without him there for the first time. It’s the people in your life that make the traditions feel like traditions.
I remember the first time I ever missed the picnic. I was 13 and in Africa for the summer. Being in Africa, the picnic should have been the last thing on my mind but the truth was it felt unnatural to miss it.
Even now at 25 years old, I don’t like missing it. The older I get, it gets harder and harder to make it each year, but I try to go at least one night and this year was no exception.
But this year I felt even more proud to be part of this long-standing tradition. My dad is the 2012 Louisburg Lions Club President so I knew how many hours him and the other Lions spent planning every detail and I was proud to watch my dad’s work unfold.
In spite of the heat, I hope you are still taking time to enjoy your own summer traditions.
Best wishes,