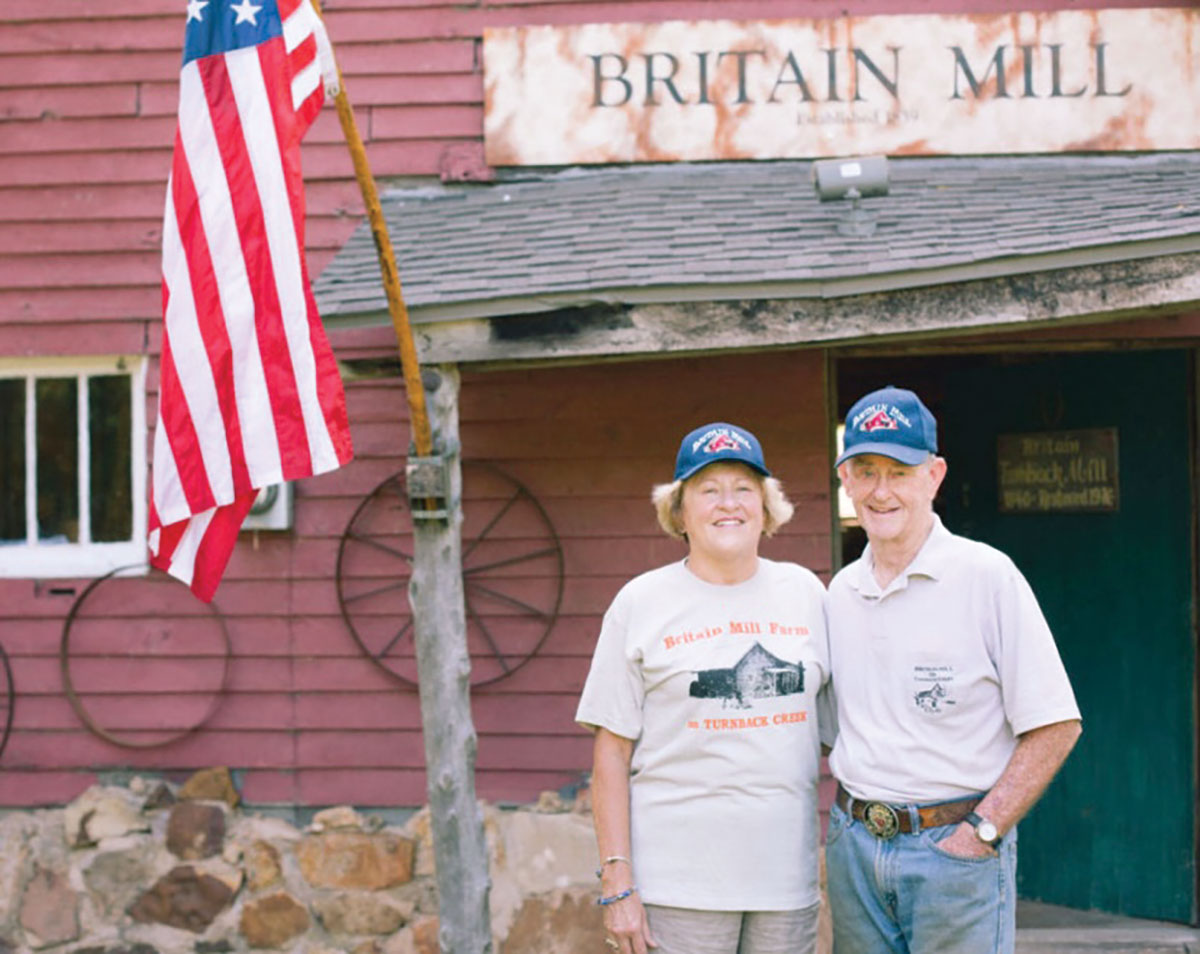 After years of disrepair, Clyde and Janet Beal have restored Britain Mill

Clyde and Janet Beal own the stunning Britain Mill on Turnback Creek, Mo. The historic mill, circa 1839, lies along Route 66 and is located in the heart of the Ozarks in Lawrence County near Halltown, Mo.

The 19th century waterwheel seems to tell a story of old when oxen-driven wagons were used for ploughing, homes were made of logs and farmers brought their grain to the local mill for processing. The mills of yesteryear were community centers of sorts where Ozarkers could exchange new ideas, different methods and catch up on local news.

When Clyde retired from his management position at Lockheed-Martin, he was ready for a more pristine way of living with less people.

“We were looking for a place to retire and Janet wanted property with a stream,” Clyde said

When the couple purchased the property in 2002, the restored mill had fallen into a state of disrepair.

“The property had been abandoned for almost 10 years after a devastating flood,” Clyde stated.

“It required a lot of work and cleanup and we needed to gather knowledge. We were both ignorant regarding grist mill operations. The term ‘grist’ is a cereal product that has been processed. It is not a misspelling of the word grits,” Clyde noted.

They slowing built the mill up so it ran on electrical power instead of water. Real stone ground grits and cornmeal tastes different than their industrial prepared counterparts.

“There is a price to be paid when purchasing commercial products. It has a long shelf life, but you pay for that in taste,” Clyde explained.

The massive waterwheel needed replacement, and the inside was a mess of dilapidated flooring and dried flood debris.

“The mill had become a luxury hotel for mice, which were its sole inhabitants,” Clyde said.

The year after moving onto the property, Clyde decided to restore the mill to its former glory.

In 2004, a plan to renovate the mill and equipment was in place. Harold Sulins of Licking, Mo., agreed to help with the restoration. Harold was a former employee of Montauk State Park in Salem, Mo.

James and Matthew Sims built the first mill. They purchased 10 acres from Washington Smith, the first sheriff of Lawrence County. The Sims brothers may have squatted on the land, which was common practice in the day. According to mill restorer Bill Cameron, the Sims partnered with Oliver P. Johnson in 1854 who installed the first carding machine in the mill.

The Likins family seems to have been of Quaker origin. They relocated from Tennessee to Missouri in stages, beginning in 1843 and 1851. The families were farmer/tradesmen that settled in Greene County, Mo. William Likins started in the milling trades when he purchased his own mill in 1853 with a family partnership. William and son George S. then purchased Turnback Mill as part of their expanding milling business in 1857. The mill was rebuilt by the Likins family shortly after its purchase as a two-story structure. The restored mill now on the site is an attempt to recreate the pre-1857 version.

The house that sits adjacent to the mill was built for Charles S. Likins and his bride Sarah Ann Adams in the mid-1800s. The house was originally a two-room structure with large sandstone fireplaces on each end and a porch across the entire front. Later, a wing was added, as well as a summer kitchen on the west side. The fireplaces and stone foundation still stand today as a testimony to their hard work and determination.

In around 1892, the Likins expanded Turnback Mill to approximately double the size of the original structure. Thirty-nine years after the Likins purchased the original 50 acres, the property had grown to 95 acres.

It was sold to G. John McCoy in 1896, who gave it to his son Norman who was responsible for mill operations. Norman produced as many as four brand names in the mill, including; Harvest Girl corn meal, Oven Buster high patent flour, Lily Rose half patent wheat flour and Choice Family flour. The brand names were a continuation of the brands used by the Likins.

A story about Miller McCoy was his practice of helping school children who had to cross the log footbridge across Turnback Creek on their way to Paris Springs. It’s said Norman shut down the waterwheel and personally assisted them in crossing the waterway, which endeared him to the neighborhood mothers. Perhaps Norman was the prototype school crossing guard of his day.

After approximately 15 years, Norman McCoy sold the mill and 64 acres to John F. Hockery, a millwright from Republic, Mo.

In 1911, John apparently improved and repaired the facilities and subsequently sold to John W. Britain in 1912, approximately seven months later.

At about the time John W. Britain acquired the mill, small independent gristmills were beginning to be threatened by larger-scale operations made possible by cheaper transportation. Under their ownership, however, the Britains made, mixed and marketed the first self-rising flour. Later they switched to feedstocks for poultry and cattle.

By the mid-1940s the mill dam was dynamited, possibly for fishermen or farmers concerned about flooding. Wash Britain was in poor health and reluctantly discontinued commercial operations.

Today, the old mill is once again ready for touring. It functions as a museum for those interested in early Ozarks settlements. Clyde and Janet are in their golden years however, they are determined to keep the property intact as a labor of love.

Honoring the Importance of Agriculture