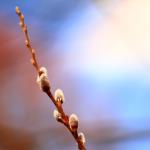 “Extension on the Go” podcast by Debbie Johnson. Episode 165: Spring Outlook for Missouri

COLUMBIA, Mo. – Missouri’s weather has a reputation for unpredictability, which gave rise to the saying, “If you don’t like the weather, wait five minutes and it will change.”

That adage appears to be holding true this spring. The outlook from the National Weather Service’s Climate Prediction Center is for drier weather northeast of Missouri and wetter conditions to the southwest, said University of Missouri Extension climatologist Pat Guinan. “That puts Missouri in a corridor of essentially equal chances of above-, below- and near-normal precipitation.”

Spring temperatures may be mild in parts of the state. “There are indications for an enhanced likelihood of above-normal temperatures across much of the northern U.S., and that actually dips down into northern Missouri,” Guinan said.

But for central and southern parts of the state, the Climate Prediction Center is indicating equal chances of above-normal, below-normal and normal temperatures.

So far, the mild weather is visiting much of Missouri. But it’s only March, and Guinan says that could be a problem. Rising soil temperatures are coaxing plants out of dormancy, but a damaging hard freeze is still possible. It’s happened before.

“Back in 2007, we had a very mild three-week period in March and vegetation was well ahead of where it should be,” he said. “Then we had an Arctic blast in the first week of April and that led to some significant damage to various crops and other vegetation around the state.”

Even though we may not know exactly what to expect this spring, Missouri did set records for the 2015-16 winter.

“The preliminary numbers do indicate this winter will definitely rank in the top 10 warmest winters on record, and we have records that go back over 120 years,” Guinan said.

Though December saw historic flooding across Missouri and was the second-wettest December on record, the faucet shut off in January and February, Guinan said. This year saw the driest January-February period since 1983.

“I think it will rank as the sixth-driest combined January-February on record,” he said.

It’s all about the slime: Building living soil