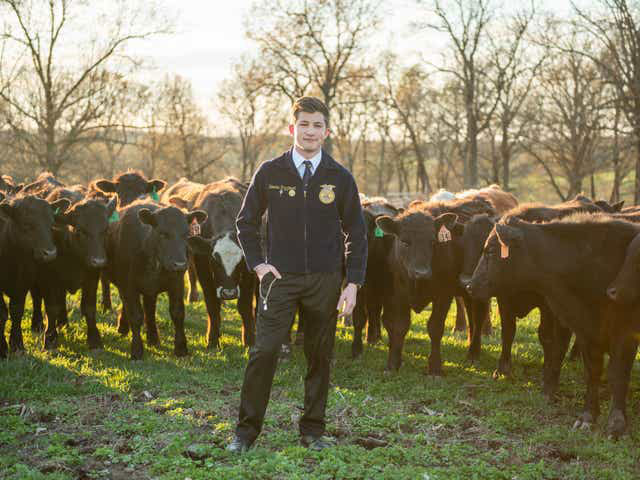 “As much as I love showing in the ring, I equally enjoy being able to talk to the general public at the fairs. I tell them how the show animals relate to the food chain and to what they eat and buy at the grocery store. That always brings up a lot of questions which helps create a better understanding of the agriculture process.”

“Josh Baker, my FFA advisor, has motivated me all along the way and pushed me to go beyond what I thought I could do. By doing so he not only helped me but the chapter as a whole. An example happened at a team Parliamentary Procedure contest in Hot Springs. I made a huge error that probably cost us the contest and was very upset because I let the team down. I wanted to give up because we had made a perfect score on the written exam and we should have won. Mr. Baker helped me work through the challenge of balancing preparation for this contest with being the Eastern District Vice President.”

What is an important early agricultural memory?

“When I was in fifth grade, FFA hosted an event with the Farm Bureau. They brought a trailer with small livestock and many informative displays. Farm Bureau sent a representative and FFA sent the officer team. I particularly remember holding cotton, and none of us knew what it was. I was amazed when I saw that it had seeds that had to be removed before processing and that the fluffy stuff left was in the T-shirts I wore every day.”

“I will attend Southern Arkansas University in Magnolia where I plan to have a major in ag education and a minor in agribusiness. I want to begin my career as a teacher as payback for what ag education has given me while I begin my own cattle operation. Later I would like to work with agricultural financing, perhaps through a bank or Farm Credit.”